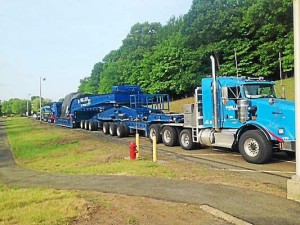 A 200-ton welding machine has been transported on a truck to Pratt & Whitney in Middletown campus and has now been installed as the site’s newest innovation. The largest welding machine ever created  has been carried on the back of a 19-axle, 200-foot-long truck following an 800-mile journey from Indiana. The move took more than two weeks to complete.

The singular linear friction welding machine was created by Manufacturing Technology Inc. of South Bend, Indiana, and brought here to play a role in Pratt’s new military and commercial jet engine production at its Middletown facility.

“Technology investments like this one secure Connecticut’s role as a global center of excellence in the Pratt & Whitney manufacturing network, and displays the company’s commitment to 21st-century manufacturing,” said Greg Treacy, general manager of Pratt’s Compression Systems Module Center, in a statement. “This machine more than doubles our capacity to do friction welding in Connecticut, and will be a critical component of our imminent ramp-up in jet.”

Treacy pointed to current technology at Pratt & Whitney, including the Geared Turbo Fan and the F135, as the products which will be enhanced by the addition of this machine. It is highly automated, can be operated by one or two skilled workers per shift – based on the operation being performed – and is ergonomically advanced for improved operator comfort and safety, according to a press release. The 200-ton machine was driven to the Compression Systems Module Center and installed in an area nine feet deep. The total machine weighs more than the weight of four A320 aircrafts. It arrived in Connecticut on the back of a truck roughly the same length as the distance from home plate to the center field grass at Fenway Park.