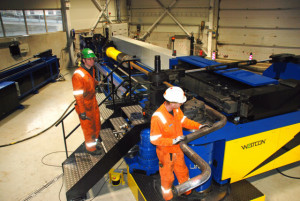 The Norwegian offshore and maritime services company Westcon Yards has installed world’s largest and most powerful all-electric pipe bending machine. Capable of generating 660,000 Nm of continuous, servo-controlled torque, the machine is used for precision bending of thick-walled carbon steel pipes up to 273 mm (10 inches) in diameter.

The addition of bending machines substantially reduces the number of cutting, welding and testing operations required for each assembly. Now, the pipes are cut, bent, re-measured, cut to final length and welded to the necessary flanges.

This is the second pipe bending machine to be installed at Westcon. The first was a 90 mm (3.5 inch) single-stack model installed earlier this year. It enabled Westcon to bring fabrication of all pipe sizes up to 60.3 mm (2.4 inches) in diameter in-house.

With the addition of the more powerful pipe bending machine, the company now intends to produce nearly all pipe sizes needed for outfitting, service and repair operations in-house.

Both machines were supplied by Unison and are fitted with their laser springback system. This system automatically measures and adjusts bend angles to compensate for the tendency of tubular parts to spring back slightly after being bent.

The bending machines simplify and accelerate the production process by allowing parts to be fabricated from single-piece piping stock, rather than using multiple cut-to-length straight sections and pre-formed bend parts brought in from external suppliers.

“Now that the larger bending machine is in place, we expect to substantially reduce production times for all pipe sizes. It’s like going from 1930 to 2016 in one stride!” said Tommy Nilsen, Head of Prefabrication at Westcon’s Ølensvåg facility, where the bending machines were installed.

The CNC-controlled machines were installed in a 3,650 square meter purpose-built engineering workshop with over 1,500 square meters allocated to pipe production. The facility includes a fully automated materials handling system, as well as an automatic pipe cutting machine.

The material storage/retrieval system, pipe cutting and bending machines at the Ølensvåg facility are fully networked. The engineering department can create the necessary machine control programs from customer-supplied drawings, CAD files or from data derived directly from a physical pipe using a laser-based coordinate measuring machine.“Our all-electric tube and pipe bending technology is starting to make major inroads into territory that was once regarded as the sole preserve of hydraulic benders,” said Unison CEO Alan Pickering.