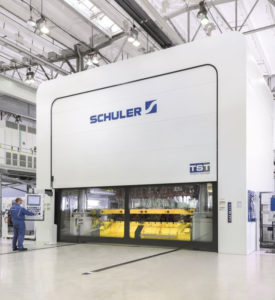 At Volkswagen’s main production facility in Wolfsburg, a press blanking line with TwinServo Technology from Schuler is now in operation. The automobile manufacturer uses it to cut sheets of steel for its entire plant, which are later formed into engine hoods, doors or roofs. The line has replaced three older machines. The new “Route 20”, as it is known internally, produces around 33,000 blanks a day. This represents an increase in production capacity of 25 per cent. In a performance test at the start of August, the system actually produced 52,000 blanks within 24 hours – and there were ten setups during this time.

Thanks to the high availability of the press blanking line, the setup can be performed in under ten minutes (“Single Minute Exchange of Die”, SMED). The compact design of the 800 ton TwinServo press at the heart of the line reduces the footprint by around 30 per cent, and the moving bolsters and dies are easier for operators to access. With fully automatic coil loading, including cutting and moving in, the strip can also be replaced in no time at all. The high-precision straightener prepares the material before the highly dynamic roll feed guides it with a maximum speed of over 200 meters a minute into the blanking press. The sensitive blanks are then destacked using the “Stop2Drop” process. The state of the entire line can be permanently monitored during this time by means of Condition Monitoring.

Together with the free-standing, fully enclosed sound protection and the servo drives in the pit, the noise level has been more than halved. Further highlights include the user-friendly, modular control concept and the improved workplace safety at the press blanking line.