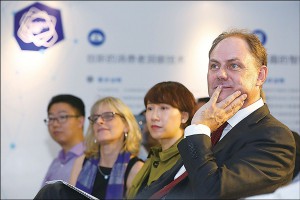 Unilever will invest at least one million euros (US$1.12 million) a year in the China Foundry to support pilot projects that have been pitched, said Marijn van Tiggelen, head of Unilever North Asia. “Unilever aims to build win-win relationship with start-ups,” Marijn said, adding that there were 32 projects having been kicked off globally since last year, including a consumer behavior research system using video analyzing technology.

Successful projects will be landed in the market within three to six months after assessment, and will have the opportunity to be introduced to Unilever’s business outside China, or even obtain further investments by Unilever Venture Co through technology usage fees or patent acquirement. “Unilever’s cooperation with EFG highlighted a new supporting model of innovation, ” said Liu Qin, associate counsel with Shanghai’s Science and Technology Commission. “A highly efficient innovation chain comes to scene under the platform established by both sides of company foundation.”

Liu said the tie-up with Unilever would help start-ups connect with the real needs of consumers, and accelerate the speed of market innovation. Premier Li Keqiang said in government’s work report this March that the innovation sector will be the core engine to drive broader economic reform and boost the real economy, giving policy backbones on the booming industry.

“Shanghai has abundant talent resources in research and technology. Unilever’s North Asia headquarter is based in Shanghai, and we built one of Unilever’s six global research and development centers here in 2009. Many of our innovations born in Shanghai have been applied in the global markets,” said Marijn. “Now we choose to launch the Foundry initiative in Shanghai since we believe Shanghai will develop into an international technology and innovation hub in the near future,” he added.