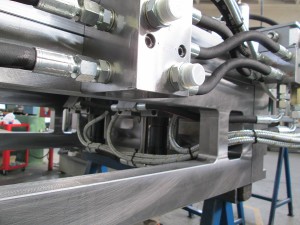 The project is extremely particular: a tool included in the context of the process automation, when integrated into a robotic refinishing system, with the aim of trimming and finishing the product coming from the die casting machining that precedes it.

Attrezzeria Acquanegrese is a company specialized in the design and manufacturing of trimming tools for deburring aluminium die cast parts and for stamping sheet metal.

Item and die
The quantity of die cast items is really endless: in this specific case we are dealing with an automotive component, that’s to say an aluminium support that is die cast in four impressions, being a volume manufacturing part (fig.1). According to the sizes and the machines of the customer, the latter has opted for the solution of a four-impression casting and therefore also the trimming tool of the finished item was requested to have four impressions and adequate sizes (fig.2).
The object dimensions are about 200 x 150 millimetres and the die at stake must trim the gating as well as the horizontal slits and the inclined plans, all to be deburred. This finishing operation, then, has been conceived by Attrezzeria Acquanegrese Srl with a trimming die with eight carriages that operate alternatively. And in fact, for each piece there are two horizontal slits, which demanded a machining with four horizontal upper carriages (fig. 3).
Once each carriage has completed its forward and backward trajectory to perform its work, other four inclined carriages start from the bottom (fig.4) for shaving some inclined faces that it would not have been possible to trim differently.
The figure number 5 shows the design of lateral and inferior carriages. The carriages are actually hydraulic cylinders equipped with deburring tools; their stroke is guided on bronze bushes and they are equipped with travel-end micros. In practice, the machine must feel if the carriage cycle has been accomplished correctly. And therefore, if for whatever reason the carriage would not signal the forward and backward stroke, the machine would stop. In real terms: the whole isle can be stopped if a simple micro has a slight uncertainty. The operation is the following: the die cast part to be trimmed is deposited on the piece support (fig.6). The trimming machine, quite particular, descends, locks the pieces while the upper slide of the machine itself simultaneously stops, then a descent stroke and a stop occur.
In this phase the hydraulic cylinders start functioning, as well as the carriages that horizontally clean the eight slits. The same cylinders and carriages go back and give the impulse to make the cylinders that operate in the underlying zone ascend and go back. When all the cylinders have completed their cycle, the machine restarts its descent, it trims all the pieces, the gating falls below and is disposed, the pieces remain inside the die, which is then lifted by the upper carriage of the trimming machine. Finally, a shovel automatically receives the trimmed parts. The whole process has obviously needed a constant collaboration between die maker and customer already in design phase.
Normally, when a casting operation needs two dies, as in this case, the isle is robotized, in practice, the trimming machine is physically close to the die casting machine and the die cast part is moved from one station to the other by a robot, which takes the cast piece, cools it and then deposits it on the trimming tool. The die has a typical structure: the base plate with the underlying gibs for fixings and, on the same plate, are fixed the supports that will house the pieces to be trimmed. This plate is the inferior part to be fixed on the machine (fig.7).
The upper part of the tool (fig.8) holds the cutting edges, the ejectors, the impression-shaped dies (fig.9) and the ejection system. Therefore, in practice, when the tool has trimmed the piece, the plate that performs the extraction must stop and ascend again while housing the pieces inside the dies. Finally, when the upper part of the tool has gone up, an extraction device positioned underneath comes into operation, provides for the extraction and the finished parts fall on the shovel itself. The same parts are ready for the successive sandblasting, threading, drilling machining and still other operations.

From design to machining phases
The design started even before the physical casting and the customer, once defined the die casting process, gave Attrezzeria Acquanegrese Srl the 3D mathematical model of the object as it would have come out from the die casting tool, with the aim of generating a sturdy and properly proportioned die because, being volume-manufactured, it must also grant long service life in time. The tool, in the context of an ordinary maintenance, needs the periodical control of cutting edges: therefore a grinding operation might become necessary to restore them because, due to their prolonged use, they might be rounded off, then losing a bit of efficacy. With this kind of maintenance, however, the tool can prove up to the execution of even 500,000 casting operations.