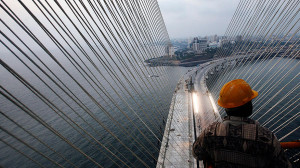 Steel demand is growing in India due to increasing demand from automotive and construction industry as well as the government’s focus on infrastructure and railways in the second half of 2014. Officials and analysts reported that the sector is showing around 3% to 4% growth in 2014 to 2015 as compared to 0.6% in 2013 to 2014, the lowest demand growth witnessed in last four years.

Mr CS Verma chairman of SAIL said that “The steel sector is expected to witness growth in demand from the H2 of this financial year with the revival in demand in the automobile sector and construction sector. The rail budget has a highest ever plan outlay of INR 6,5445 crore in FY15. The thrust on close monitoring of dedicated freight corridor projects, new high speed and semi high speed projects, track renewal, development of wagon leasing business, up gradation of stations, procurement of rolling stock, doubling and tripling of lines and gauge conversion is likely to boost steel consumption.”

Mr TV Narendran MD of India and South East Asia, TATA Steel said that “The government’s emphasis on developing 100 smart cities and assigning a sum of INR 7,060 crore towards the development in the current fiscal indicates a significant opportunity for the steel industry. However, we are disappointed with the expected increase in the rate of royalties for minerals. It would lead to an additional cost burden on an already capital intensive industry.”

Mr RK Goyal MD of Kalyani Steel said that “At the moment the sector continues to remain under stress and revival is expected only from the second half of this year. Government’s focus on infrastructure would definitely help the sector in reviving growth but for the projects to start on ground, it would take sometime. Fact is at the moment demand for steel continues to remain muted while input costs of key raw material like iron ore has gone up and excise duty of 2.5% on coking coal would further escalate costs of steel companies.”

Mr Kamlesh Bagmar an analyst at Prabhudas Lilladher said that “The sector witnessed meager growth of 0.6% in 2013 to 2014 and even in April to June, 2014, the growth continues to remain muted at around 0.5%. However, the auto sector has already started showing signs of revival and with the government’s focus on affordable housing, the construction sector is also likely to witness revival in demand post monsoon as construction activities starts picking up. The government’s thrust on infrastructure and railways would further help the sector to witness revival in growth from the H2 of this financial year.”