The research in simulation-based design software are helping electric motor and transformer manufacturers to increase the performance of their equipment at an unprecedented rate.

Electric machines have made rapid performance gains over the last five years, whether in terms of efficiency, weight and noise. In addition to material technology improvements, much of this progress can be attributed to design optimization supported by the latest simulation software.

“We need only look at the automotive industry for evidence of this,” says Vincent Marché, product manager at engineering software company Altair. “It took over 100 years to develop a robust and reliable combustion engine but using a simulation

-driven approach, Toyota managed to achieve an acceptable level of performance from an electric motor in just over 10. Now every major automotive manufacturer is working on bringing out an electric-hybrid or all-electric vehicle – it’s a sprint to the market!”

The transformer industry has also used simulation-driven design in a race against time to meet ever-tighter efficiency regulations, customize ranges and support the integration of its devices into smart grids.

Unlike traditional analytical design and performance evaluation methods, which can involve weeks of toing and froing between specialist teams, simulation software has developed to support a multidisciplinary approach.

Simpler workflows
“Traditionally the process starts with a CAD (computer aided design) drawing, then someone works on the electromagnetic design and then a thermal analysis specialist takes a look at it, after which it goes 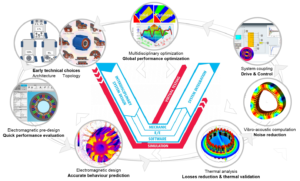 back to the CAD team for modification and then back to the electromagnetic design team again. Each iteration can cost a number of days,” Marché says. “The latest simulation software, however, provides compatible files that can be worked on by different departments simultaneously.”

Simulation can also help save manufacturers time and resources by reducing the number of prototypes needed. “If manufacturers start their design with the physics as opposed to a geometric CAD drawing, they won’t need to prototype all the motors in a range before starting production,” he adds.

This level of accuracy and sophistication has been made possible by increased computational power, as well as the incorporation of various modules, such as electromagnetic, thermal and acoustic analysis, into a single system. The performance of an electric motor, for example, can even be simulated with gears attached in a mechanical environment. Altair set about to achieve this high level of integration through the strategic acquisition of other specialist design and evaluation software companies – EMSS / FEKO® in 2014 and CEDRAT / FluxTM in 2016.

“It takes more expertise to design a tool that is universal as it needs much more know-how about the physics and the machines. Only developers who fully understand the machines’ applications and how it works can design such a solution,” he says.

Pay-as-you-go software
Altair has also invested in improving the userfriendliness of its software, likewise speeding up the process. Perhaps the most radical development in simulation software, however, is Altair’s patented units-based licensing system, which allows metered usage of its entire suite of products, making them more affordable for companies of all sizes.

“In the past, simulation software was only financially viable for very large companies who had the budget for the multiple licenses and specific agreements involved,” he says. “Today, companies can pay for the software depending on their intensity of use, which significantly helps to bring the cost down. It has been incredibly empowering – not just for design engineers but also technical specialists who are able to evaluate the performance and adapt production quickly.”

At the heart of the industry
Reflecting the importance of design simulation to the electric motor and transformer manufacturing industries, Altair’s technical experts and application engineers will be hold a keynote and three workshops at the forthcoming Cwieme Berlin exhibition for coil winding, insulation and electrical manufacturing.

Major product launch
Altair will also launch its new motor software, called FluxMotor. Users will be able to tweak the number and shape of slots, winding type, material etc. in the electromagnetic model and see an immediate impact on the size, weight, cost and efficiency of the motor. It will even be possible to compare different variants side by side. FluxMotor compiles the results into a single resource at the end of the computation, which is accurate enough to extend to a range of products. This launch fits perfectly with the global trend noted by Altair for more application-dedicated tools, such motor design.