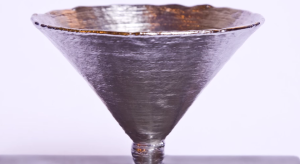 Allowing designers to produce geometries and parts that were physically impossible to produce only a few years ago, 3D printing technology is radically altering Metal manufacturing industry.

EBAM has traditionally been a bed 3D printing technique similar to selective laser sintering (SLS), however, rather than only melting the outer layer of a layer of metal powder, an electron beam completely liquefies metal wire feed. Parts made using EBAM printers are built in a vacuum environment using extremely high temperatures up to 1000 °C. This process leads to denser parts that tend to be more durable and do not require any sort of post printing heat applications like parts made using SLS.

Sciaky Inc launched their line of EBAM machines back in 2009 and the company says that they feature one of the most cost effective metal 3D printing methods in the industry. Their method in an electron beam directed energy deposition, and layer-additive process that creates near-net shaped parts in virtually any metal, including high-value metals like titanium and tantalum. Their EBAM metal 3D printers feed metal wire stock and melt it into shape using a powerful electron beam gun. The EB gun can deposit material at rates ranging from sever pounds an hour to a whopping 20 pounds an hour. Sciaky also offers a dual feed system that can create objects from two different metal materials at the same time. 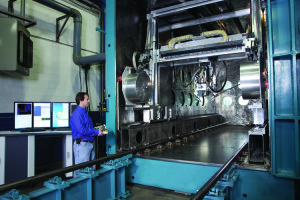 A new website featuring an expanded line of Sciaky EBAM metal 3D printers was just launched, showing off each individual model’s features and offering financial assistance and leasing options. The new EBAM options include medium-scale, large-scale and mega-scale part manufacturing options. At 19 feet in length, the mega-scale EBAM 300 series boasts the largest metal 3D printing build volume on the market. The line also includes the brand new 150 series and the 110 series (large-scale) and the 88 series and 68 series (medium-scale) machines.

Below you will find some of the dimensions of the four new machines that Sciaky has just unveiled:

“Sciaky is proud to launch its new website and unveil its expanded lineup of new EBAM metal 3D printing systems. We hope the new website enlightens visitors about our innovative, industry-leading solutions and inspires them to contact us,” said Sciaky general manager Mike Riesen.

The EBAM technology developed by Sciaky is already proving itself to be indispensable for companies like Lockheed Martin Space Systems who are using the process to 3D print titanium propellant tanks for their satellites. The propellant tanks are printed in two individual parts that are then joined, and have a geometry that is nearly impossible to complete using standard additive or subtractive manufacturing methods.

Sciaky EBAM metal 3D printers create what are called near-net objects, meaning that they only need a small amount of post processing and polishing to be the final product. Because the metal stock is completely melted before being deposited it results in much stronger parts that take significantly less time to produce than other metal 3D printing methods. Additionally, the process can be used to repair or join damages or modular parts without the weakness or seaming of traditional welding or metal joining techniques.