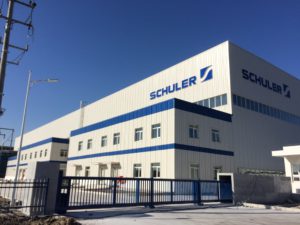 The Schuler Group has sold its technology center in the North Chinese city of Tianjin to the Swiss company Feintool. Based in Lyss, Switzerland, the company plans to produce precision components for the automotive industry in Tianjin using Schuler presses. Schuler itself continues to expand its market position in China as a leading manufacturer of metalforming equipment.

The two parties agreed to maintain confidentiality regarding the details of the transaction. The purchase agreement is expected to be closed at the end of March 2017. Feintool intends to expand production capacity in Tianjin during the course of the year with the use of Schuler technology.

“Since its launch in 2014, our TechCenter in Tianjin has been very well received by the market,” stated Schuler CEO Stefan Klebert. “Local demand for Schuler to produce automotive components in China grew strongly in 2016 in particular. We have therefore achieved our strategic target of inspiring customers in China to use Schuler technology. However, our core business is the production of plant and machinery rather than vehicle components and we are therefore happy to have found a strong buyer in Feintool who can now take this task to the next level.”

The Chairman of the Board of Directors of Feintool, Alexander von Witzleben, explained that Feintool’s investment in China was in response to customer demands for global presence and world-wide expertise. “This will enable use to close a strategic gap in Asia,” he said.  Feintool will retain all 30 or so employees and the infrastructure of the plant in Tianjin, as well as the existing customer orders.