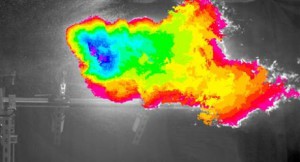 Researchers at Caltech and JPL have discovered a polymeric fuel additive that can reduce the intensity of postimpact explosions that occur during accidents and terrorist acts on airplanes. Furthermore, preliminary results show that the additive can provide this benefit without adversely affecting fuel performance.

Jet engines compress air and combine it with a fine spray of jet fuel. Ignition of the mixture of air and jet fuel by an electric spark triggers a controlled explosion that thrusts the plane forward. Jet airplanes are powered by thousands of these tiny explosions. However, the process that distributes the spray of fuel for ignition – known as misting – also causes fuel to rapidly disperse and easily catch fire in the event of an impact.

The additive, created in the laboratory of Julia Kornfield, professor of chemical engineering, is a type of polymer – a long molecule made up of many repeating subunits – capped at each end by units that act like Velcro. The individual polymers spontaneously link into ultralong chains called megasupramolecules.

Megasupramolecules have an unprecedented combination of properties that allows them to control fuel misting, improve the flow of fuel through pipelines, and reduce soot formation. Megasupramolecules inhibit misting under crash conditions and permit misting during fuel injection in the engine.

When added to fuel, megasupramolecules dramatically affect the flow behavior even when the polymer concentration is too low to influence other properties of the liquid. For example, the additive does not change the energy content, surface tension, or density of the fuel. In addition, the power and efficiency of engines that use fuel with the additive is unchanged—at least in the diesel engines that have been tested so far.

When an impact occurs, the supramolecules spring into action. The supramolecules spend most of their time coiled up in a compact conformation. When there is a sudden elongation of the fluid, however, the polymer molecules stretch out and resist further elongation. This stretching allows them to inhibit the breakup of droplets under impact conditions—thus reducing the size of explosions—as well as to reduce turbulence in pipelines.