RUPES BigFoot MarkII has cleaned the famous Ferdinand Magellan Presidential Railcar U.S. No.1. Built in 1928, this train is a piece of American history; it was used to transport in maximum security the U.S Presidents, such as Roosevelt, Truman and Eisenhower.

On last February , 1st and 2nd, a selected team of professional detailers and automotive experts, coordinated by Jose Fernandez, owner of Superior Shine Auto Detailing of Arcadia, meet at the Gold Coast Railroad Museum in Miami to detail this amazing piece of history.

The Ferdinand Magellan Railcar was built in 1928 and put into service as a standard service Pullman railcar. In early 1942 it was pulled from service and modified with steel armor plates and bullet proof windows to transport the U.S. President in utmost maximum security.
Roosevelt regularly used the Ferdinand Magellan until his death in 1945. The railcar was then used to transport Presidents Truman and Eisenhower. Presidential Railcar U.S. No.1 was taken out of service and officially retired in 1958. It has been on display at the Gold Coast Rail Museum in Miami, Fla. ever since. 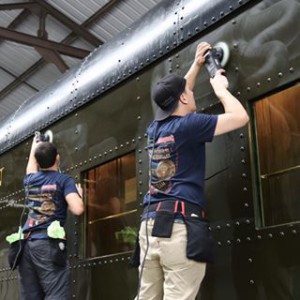 The exterior of the rail car was restored in the mid-1990s. Today, The Ferdinand Magellan, while in good condition, is in dire need of a professional cleaning, polishing and waxing so that it will look new and be preserved for all to enjoy.

Car body is been polished and finished with the new RUPES MarkII, to restore and preserve it from signs of the time.

Intervention on the famous railcar is been totally free of charge for the museum.