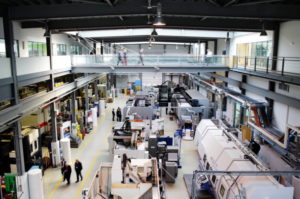 Researchers from the University of Sheffield Advanced Manufacturing Research Centre with Boeing are pushing the boundaries of reality after becoming one of the first organisations in the UK to take delivery of Microsoft’s new HoloLens technology. The AMRC’s Integrated Manufacturing Group (IMG) is a leading centre for expertise in the development and use of Augmented and Virtual Reality technologies for manufacturing applications.

Following its acquisition of a HoloLens headset, ahead of its release in the UK at the end of November, IMG has been increasing its expertise in the field of Mixed Reality (MR). Augmented Reality (AR) creates a live direct or indirect view of the real world and augments it with computer-generated input such as sound, video, graphics or location based data. Examples of AR work completed with IMG include delivering instructions in the workplace using tablets and wearable technology, and dramatically cutting the time taken to produce modular building panels through the use of projection technology to show exactly where components need to be fixed, instead of the assembly worker having to use a ruler and pencil.

Virtual Reality (VR) uses software-generated images, sounds and other sensations to replicate a real or imaginary environment with which the user can interact. Here, examples of IMG’s work include using HTC Vive and Oculus Rift headsets to create simulations that allow a wearer to practice assembling products using virtual components before doing the task for real. The systems mimic real world physics enabling users with no technical know-how to use the system. Mixed Reality allows users to see and move 3D holographic virtual articles in the real world.
Delegates at a recent conference on future manufacturing technologies at the AMRC were shown how they could move a full sized holographic image of a robot around its Factory 2050’s shop floor and put the robot through its paces.

“HoloLens technology allows you to work out where the robot needs to be to serve a number of machines that are already on the factory floor,” says AMRC Augmented Reality Technical Fellow, Chris Freeman, who leads IMG’s work on Digitally Assisted Assembly. “You can move the holographic image of the robot at the flick of a finger, put it through its paces and checking it will do what you want it to do, safely, before you have even bought the robot, let alone started bolting it to the floor.”

Another demonstration using the HoloLens and the internet-based video telephone system Skype, showed how an expert could provide help directly to an engineer in the field. The HoloSkype system not only shows the expert exactly what the engineer can see, but allows them to show the engineer what to do by drawing arrows or transmitting text that can be seen by the engineer on their HoloLens headset.

“We are assessing the HoloLens for its suitability to create proof of concept applications for automated assembly tasks and in-line support assistance. For technologies like these, the ultimate goal is that they will be used for digitally assisted assembly techniques assisting engineers and technicians to improve quality and create efficiencies by reducing rework, scrappage and concessions,” said Chris Freeman.