Automated post-processing as a prerequisite for industrial series production with metal 3D printing. 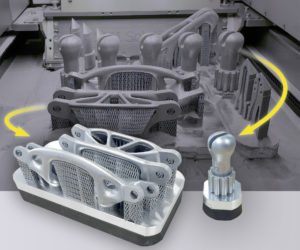 Due to the use of design possibilities and freedom, which are no longer linked to the limitations of traditional production, 3D printing of metal components has been widely recognised as an independent production method with great expectations. However, with mass production and the associated need for automation, the manual production steps typical of the production of individual parts need to be changed. Printed metal components do not come out of the printer ready to be used. In most cases, the components are fixed to the base plate by means of base structures and they must firstly be separated from the base plate. The plate fixing also serves to resist inner components’ tensions generated during printing, mainly due to temperature differences. Only a subsequent heat treatment expands the workpiece to avoid any risk of bending. The base structures also allow certain geometries such as embossed work, back cuts and cavities to be carried out during printing in the powder bed process. The target is, through an adapted design, to have as few support structures as possible but usually this limits one of the greatest advantages of 3D printing, namely the freedom of design. Powder residues also adhere to the components and are partially melted on the surface. Powder can also accumulate in the cavities. If, for example, the outputs are blocked by support structures, it is difficult to empty them. The post-processing mentioned above can also be integrated with the simultaneous application of pressure by means of the so-called hot isostatic pressing (HIP). HIP has the advantage of reducing the micropores left in the material so that in most cases the packaging compactness of printed components can be reduced by up to 99%. If the component is powder-free, heat-treated and separated from the base plate, the supporting bases are removed mechanically from many places. This includes manual milling, pincer cutting and filing. Therefore, the surface roughness of parts that cannot be used in industry field is reduced by radiation and a desired form of tumbling. These recently include procedures for vibrotumbling with chemical processes. All these procedures have in common is that it is possible to work both on the internal spaces and on the geometric back cuts. The above mentioned post-processing chain also includes many manual steps. The process chain is discontinuous and therefore cannot be automated in this way. It is therefore not possible to carry out mass production. Some of the most interesting geometries are also excluded and therefore the design freedom of 3-D printing. The production of large quantities of parts requires the greatest possible automation, with perfectly harmonised process steps, high traceability and reproducibility.

At this stage, electrochemical methods enter the scene (galvanic processes, in a broad sense). The best known method in this field is the classic electrolytic finishing; however this has similar limitations in many areas, as regards workpiece geometry and the internal areas, which can not be cleaned electrolytically, but with enormous effort. A suitable dynamic procedure for these tasks is the patented Hirtisieren® (hirtisation) procedure. This procedure originates in electrochemistry as well, but it has been specially developed for various post-processing tasks of 3D moulded metal components. As a chemical and electrochemical procedure, it offers an alternative to the common mechanical processing steps. Through fluid-based systems, it is possible to reach even hard-to-access zones, because of their geometry, and internal parts of the components. In its unique three-stage process, Hirtisieren® removes the supporting structures and sticked powder residues in the first step, levels the surface to a technically usable level (Ra < 2µm) in the second step and polishes the workpiece, if necessary, in the third step. At this stage, the chemical and electrochemical processes act as an activator of the new geometries of workpieces, thus supporting the freedom of design and therefore being one of the strengths of 3D printing. The controllable scalability of electrochemical processes also helps turn 3D printing into a highly efficient and reliable method of mass production. Hirtisieren® is implemented as a finishing function at Hirtenberger Engineered Surfaces or through fully automated finishing modules on site with the 3D printer. The procedure can also be implemented for future large series in the finishing paths of an H12000 with a capacity of 500 workpieces per hour.

Digital twinning up to post-processing

When switching to mass production, all interfaces in the whole production chain must be defined, closed and monitored for quality assurance. A very important partial aspect here is the creation of the so-called digital twinning. Digital twinning is the virtual image of a specific product that goes side by side with its physical feedback throughout its shelf life. This simulation model is also assigned to a single product and, in a first (temporary) phase, is supplied with the load data resulting from the current sensor data. And it is precisely from the point of view of efficiency that the virtual representation of machines or plants, as an image on a digital platform, offers the company several advantages throughout the entire life cycle: from product design and production planning to engineering, commissioning, operation, maintenance and modernisation of systems and plants. The twinning up, with a digital and a real system, remain permanently connected, thus generating a common memory of the object. This was born ideally from the first study. In this way, the simulation model reflects the state of the current physical installation. However, digital twinning should not only describe the component as such, but also the whole origin of the component throughout the production chain. From the start of the material through all the processing phases up to the finished workpiece, all the variations of the several characteristics are completely detected, as well as all geometric variations related to each phase. In this way it is possible, through digital twinning, to recognize exactly the real workpiece at each stage of its creation and then perform the production of the workpiece purely on a digital level. The virtual representation in the form of this intelligent 3D model allows, among other things, early identification of development errors and potential problems that could otherwise be detected only after production has started. The characteristics become predictable according to the production phases and related production parameters. And here, even if it goes almost unnoticed, there is an absolutely important development phase! The origin of a workpiece now takes place in a virtual space throughout the entire production chain. The production and the workpiece itself exist first of all in the cloud, before the creation of a physical object. Therefore, a radical change in the way of thinking is needed. The workpiece already exists digitally (really!) in the digital world and from this virtual world it is materialized in the physical way. In particular, post-processing should be added to these reflections. The following processing steps must already be taken into account when planning the workpiece, e.g. changing the sizes of a workpiece after finishing. This allows you to track and monitor the whole process, including the final finishing.

In conclusion, I would like to briefly mention another important point in the field of 3D printing that has so far been little considered. Classically produced parts are, of course, coated in the last stage of production. The coating serves as a corrosion protection, improves the decorative appearance, improves the chemical stability during use or is a protection against wear and tear. The appropriate coating is selected according to the corresponding requirement. It can therefore be a galvanic coating, a varnishing, an immersion cathodic coating, an anodising (anodic oxidation) or a ceramic coating (in most cases by a physical process such as PVD). Considering that this surface protection is now a widely used industry standard, it is almost obvious to think that sooner or later this topic will become relevant even for 3D moulded parts. I am thinking in particular of its use in mass production of cars. This is also an aspect of post-processing and must be integrated into the entire process chain via the interfaces mentioned above.

To sum up, post-processing is an absolutely important aspect in the transition from the production of a single piece to mass production. If 3D printing will establish itself as an independent production method, it will be necessary to make this great step towards mass production. Post-processing requires defined and closed interfaces, an automation level that is as complete as possible and a scalability of the individual production steps. The best solution seems to be the integration through the use of digital twinning up and the consideration of post-processing already in the design files. If new paths are taken in the design of the part and if we do not simply try to replace the current production process, which has been optimised over decades with 3D printing, then 3D printing of metal components will be used in industrial series production. Intelligent solutions with virtually unlimited design freedom also reduce costs. Harmonized and automated production chains, from design to printing and post-processing, further reduce costs and make the entire process economically attractive, enabling essential and traceable quality management. In this case, post-processing should not be a restriction!

Post-processing is highly dependent on the moulded part. One of the so-called “defined and closed interfaces” is the workpiece carrier system. And in this case AM-LOCK from pL LEHMANN is used. For automated post-processing, such as for holes, threads, precise surfaces or even part measurement after 3D printing, individual parts can be separated without being detached from the construction platform. Only in this way it is possible to have the zero point of the workpiece. Depending on the individual requirements of post-processing, it must be possible to direct the moulded parts accordingly. The separation from the pallet must also take place as late as possible, in order to achieve maximum efficiency and precision. Since a zero-point clamping system with a powder bed is subject to special conditions, the traditional mechanical movement must be avoided. AM-LOCK uses process heat and meets this requirement with a Thermo-Lock. In post-processing, however, many users already use well known systems. Therefore, even a zero-point clamping system and additive workpiece holders must be ready. AM-LOCK can therefore be easily adapted to different systems, without having to remove the 3D moulded parts from the substrate plate. If you look at 3D printing of metal parts from a bird’s-eye perspective, then you look at the whole value chain to industrial production technology: from design to data preparation, from printing process to post-processing, from software data continuity to hardware part transfer to traceable quality management, there are still many open questions – but there are already very good system solutions. One of these is the AM-LOCK hirtisation.