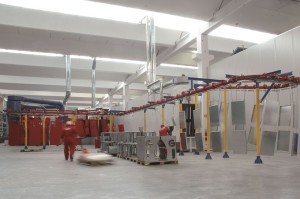 An effective technological cycle, compliant with the specific needs of the pieces to be treated, is the first “responsible” for the aesthetical quality and the durability in time of the surface treatment. To meet that need, Tecnogen has decided to buy a suitable painting technology, performing and at the same time modular, from Euroimpianti.

Part of Bruno Group, entrepreneurial reality with 100 million Euros of turnover and headquarters at Grottaminarda (AV), Tecnogen mainly operates in the design and production of power generators and lighting towers. Activity carried out in four productive factories in Italy, among which stand out the plants situated at Pontenure in the outskirts of Piacenza. Relying on over 19,000 square metres of covered surfaces that take up an overall area of about 46,000 square metres, it represents also an important logistic platform to reach the most important European infrastructural arteries in short time. «Our production – specifies Emanuele Rizzi, plant manager – is in fact addressed by over 80% beyond the borders, to satisfy the requirements of more than 50 Countries in the world». The expansion strategy, accomplished by the young and dynamic management, has in fact determined a fast transformation of the company that, from productive core operating on national scale only, has become an industrial reality of international relevance, able to generate a yearly turnover exceeding 30 million Euros, employing about 80 people. A staff able to manage in-house the whole product development cycle, from the sheet metal processing to the assembly and the final testing. And among the most important production phases stands out painting, for whose execution they have chosen a plant manufactured by Euroimpianti at Valeggio sul Mincio (VR), company that for forty years has been designing, producing and exporting worldwide suitable plants for finishing all metal surfaces. 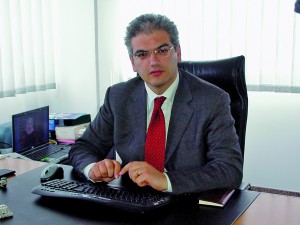 The efficacy of the product development cycle
In this context, the range of TecnoGen products, constantly evolving according to the indications expressed by the market, is one of the most exhaustive on a world scale and it allows proposing the best solution for all applications, from the industrial sector to renting, from building and road yards to agriculture, from the residential sector to entertainment. Power generators are made with diesel or fuel engines, with soundproof versions implemented with galvanized steel canopies in-house manufactured. «Our offer – adds Rizzi – includes also generators in super-compact models, gensets with synchronization systems for autoproducer power stations, generators equipped with remote control systems». The product range is completed also by engine-driven welders, motorpumps, PTO shaft generators and lighting towers. The lighting towers, equipped with hydraulic elevation systems and metal halide lamps, are mostly used in the most demanding applications like civil defence and renting. And it is just to grant also the quality and the resistance of the surface finish in the most different environmental conditions that Tecnogen avails itself of painting machines by Euroimpianti. An effective technological cycle, compliant with the specific requirements of the pieces to be treated, is the first “responsible” for the aesthetical quality and the durability in time of the surface treatment. «Keeping into account the fact – underlines Rizzi – absolutely not negligible, that a relevant part of our business is represented by the sale of our machines to renters. Customers to which we are expected to supply a product able to keep quality unchanged in time as much as possible». In particular, inside the production site at Pontenure is installed a plant including: a pre-treatment tunnel with phosphor-degreasing, washing with net and demineralised water; drying oven with air curtains; 2 powder coating booths; a belt-type curing oven; monorail overhead conveyor. «It is a plant – adds Rizzi – that allows painting components with maximum sizes that can reach 1,000 x 3,000 x 1,800 mm». 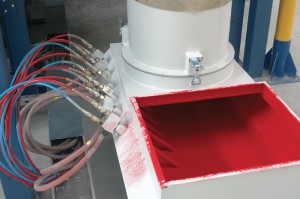 Modular and fully expandable
With 2,000 plants already installed, today Euroimpianti represents a reference partner for new productive painting plants for all metal surfaces, besides providing skilled service on the existing machinery. The reason for this success resides in the modularity of the proposed solutions, in the fast delivery, in the prompt adaptation to single specifications and in the constant technological upgrading. It is worth highlighting then that the possibility of designing each single plant starting from modular components offers endless configuration possibilities, keeping the operational advantages unchanged. Therefore different configurations will be designed according to single needs of lower or higher productivity, depending on the pieces to be painted. In this context Euro 90 constitutes the founder of this peculiar technological approach, whose winning feature is just the modularity on which the components of each design are based: as confirmed by Euroimpianti technicians, with simple structural interventions and without affecting the existing plant parts, it is always possible to expand the technological cycle by integrating pre-treatment phases, by adding painting booths or increasing sizes to enhance the productive capacity. Depending on the metal type to be treated (for instance iron, or aluminium and so on) and on its alloys, it will be possible do adapt the washing to the chemical cycle programmed. As a matter of fact, just a correct preparation of the piece surface (resulting from the combination of the suitable chemical product and of the pre-treatment time needed for each phase) allows then achieving the correct qualitative result of the finished product: mechanical resistance, resistance to corrosion, gloss and shade. Plant modularity that has proved to be strategic and winning also for Tecnogen that, in order to satisfy new productive requirements, succeeded in optimizing its process without particular revolutions and most of all with very fast upgrading times. «In 2013 – explains Rizzi – some years after the plant installation, we asked a technological upgrading. In particular, we have extended the curing oven, the washing part and the transport chain and, at the same time, we have increased the process speed. Besides, still with the aim of heightening the productivity without affecting the final process quality, we decided to automate also the second booth». Choice, the latter, to be framed in a wider strategy of business management, in favour of the total traceability of the various components that then compose the various products. Concerning this, all the systems developed by Euroimpianti are equipped with multi-language touch-screen control panel integrated into the electrical board to monitor all the operations and the occurrence of eventual failures. Therefore, on one side modularity and on the other side productive efficiency, minimum energy consumptions, prompt delivery of spare parts, absence of eventual production errors and fast delivery make the plant reliable and always competitive in time. Peculiarities appreciated by Tecnogen, to the extent that it satisfactorily uses a Euroimpianti painting plant also in another productive unit.

Efficient and silent
The new power generators of the Whisper Cube series and in particular the model PK23 W³ developed by Tecnogen stand out for their compactness and the optimized sizes (195 x 77 x 123 cm) and for the presence of the electrical radiator (instead of mechanic that on the contrary equips standard power generators),for the dual muffler of residential type (to achieve a reduction of the emitted sound level, that’s to say 81.6 Lwa at the source corresponding to about 59db at 7 metres at 75% of the load), for the limit of environmental temperature in terms of viability fixed at around 55°C and for the reduction in the fuel consumption levels (3.6 l/h). Another strong point concerns the possibility, thanks to an inverter and to a particular sensor, of making the fans turn in variable manner, together with the presence of a soundproof tunnel for the air flow, still in favour of the sound emission reduction. It is worth signalling also the reinforced Base Frame of “heavy duty” type, with extractable tank and increased compared to the standard (180 litres) and, very important logistic datum, the possibility, due to the optimized geometry, of transporting that model up to 36 units in a 40-feet container of high-cube type. Also in this case the sheet metal walls were painted with the Euroimpianti plant, thus granting aesthetics and surface tightness that permits the installation of the power generator also in aggressive environments.