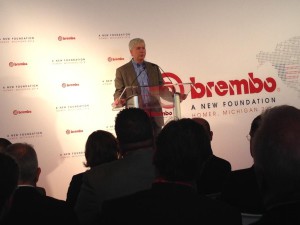 Brembo announced that North America will become the number one market for the group by the end of 2014. North America closed 2013 with a 19.4% increase in revenue from 2012 and recently announced a 27.7% increase during the first quarter of this year compared with the first quarter of 2013. “This expanded and modernized production facility represents a new foundation for Brembo in North America, enabling us to increase our presence in the U.S. market and offer better service to our clients,” said Brembo S.p.A chairman, Alberto Bombassei. 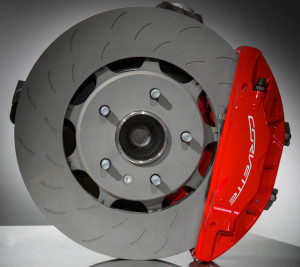 While the company has always had a strong presence in the North American market due to its significant European-based original equipment manufacturer (OEM) applications, Brembo North America’s recent growth was spurred by two events: the purchase of the Hayes-Lemmerz Automotive Brake Component division in November of 2007 and the substantial growth of US-based OEMs.

With a very successful history in racing dating back to 1975, Brembo also has a facility in Mooresville, North Carolina, near the headquarters of several major racing teams. Brembo’s high performance brake systems have supported F1, IndyCar, NASCAR and Sports Cars Racing Series, among others.