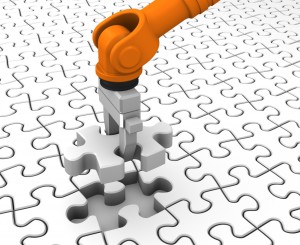 Automation and cybersecurity will be the next steps of digital manufactoring driving a new era of connectivity. Although the case for automation is decades old, automation today is about far more than just adding robots. Humans and computers are natural partners. Historically, simple and repetitive tasks have been performed by computers, while complex and creative tasks were better suited to people. Modern factory floor automation, though, depends on system integration on a scale that has never been seen before. Modern manufacturing enterprise automation depends on integration between production and back office systems. The software systems that help run the business of manufacturing must be more interrelated than ever before to the physical processes of manufacturing.

Better enterprise-wide automation has the potential to unlock massive productivity gains and disrupt existing business models. The software systems behind automation hold potentially daunting threats though, if cybersecurity risks are not addressed appropriately. Information security is already a big enough challenge, but what additional concerns arise when machinery controls and commands are involved?

Cyber-physical security must consider both the computers and networks of traditional information technology (IT) and also the controls and priorities of operational technology (OT). Broadly speaking, OT encompasses nearly all industrial systems from HVAC to lighting to machinery. Nearly all products and services offered by AMT members fall under OT, and integration (or lack thereof) between IT/OT systems is a consistent pain point in manufacturing.

Of course, the security considerations for back office and traditional IT are often inconsistent with the needs of production systems, factory floor networks and other OT. To maintain acceptable uptime while protecting control systems from viruses and traditional cyber-attacks, production machinery is rarely connected to the internet at all. Legacy systems or controls running older operating systems are often isolated from all networks, partly thanks to lack of connectivity and partly as a preventative measure.

As traditional automated systems and cells become ever more powerful, though, total network isolation will increasingly be a competitive disadvantage. Lights-out manufacturing is far more plausible with remote diagnostics and monitoring than as a “set it and forget it” process. Factory support over the internet offers huge potential in time and financial savings compared to service calls for software issues. The industry is already standing up to address the very real threats associated with network and systems integration, and that is unlocking some very exciting opportunities.