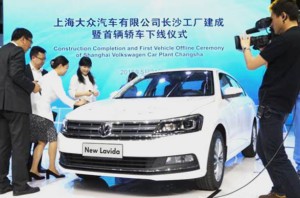 The plant, based in the provincial capital of Changsha, has an annual capacity of 300,000 units and covers an area of 1.67 million square meters. The plant, built by the automaker’s Chinese partner Shanghai Volkswagen, is a state of art facility featuring a press shop, body shop, paint shop and final assembly floor.

Shanghai VW also has plants in Shanghai, Nanjing, Yizheng, Urumqi and Ningbo. Volkswagen Group China, which includes Shanghai Volkswagen and FAW-Volkswagen, delivered 3.68 million automobiles to the market across the Chinese mainland and Hong Kong in 2014, up 12.4% year on year.