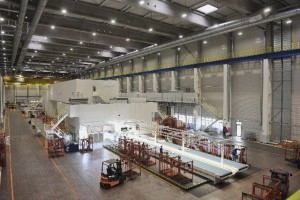 New Volkswagen Commercial Vehicles servo press line by Schuler has officially put into operation in Hanover, Germany. The line consists of six individual presses and has a total press force of 91,000 kilonewtons. It is driven by 15 torque motors with a total torque of 600,000 newton meters.

With a speed of 17 strokes per minute, the servo press line will be used, for example, to produce parts for the T6 Volkswagen bus. When producing four parts per stroke, the line has a maximum output performance of 68 parts per minute.

The high level of productivity is the result of the perfect interplay between the automation components and the six individual presses that make up the line. At the head of the line are two robots: they alternately remove blanks from the stack and place them on a conveyor belt. The camera of an optical centering station calculates the exact position of the blanks so that the Crossbar Feeder can place them accurately into the first press.

As soon as the die opens after the first forming stage, the next Crossbar Feeder glides in to pick up and remove the part using its suction cups – just fractions of a second before the next blank falls into the die. These processes are so precisely coordinated that the Crossbar Feeders come within a few centimeters of each other without ever colliding. The parts can therefore be transported within seconds from one press to the next as they gradually develop their final shape.

The dies and toolings are changed fully automatically in just three minutes. The toolings are stored on the press at the beginning and end of the line, allowing the space requirements for the compact line to be reduced to a minimum. 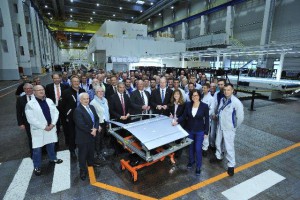 The Schuler line features not only pause and standby mode, but also a device to regulate the temperature of cooling water and a usage-based compressor control system designed to reduce energy needs. The press operators can centrally monitor and control all consumption levels.

Naturally, this also includes power consumption. Each individual press moves a mass of over eighty metric tons to open and close the dies – and the line’s energy consumption is correspondingly high. But when the press brakes the die on its way down, energy is also released. This braking energy can be stored temporarily via a flywheel and then used when the press has to lift the die again. This enables the press to reduce its power consumption and the peak loads for the plant’s internal power supply.