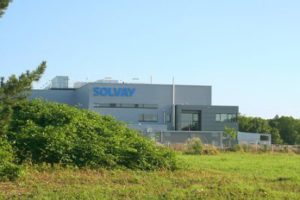 Solvay CEO Jean-Pierre Clamadieu said: “This new facility and the site’s upgraded infrastructure further strengthen Solvay’s long-term support to its customers in response to their growing demand for its industry-leading lightweighting materials and technology.” Upon completion of the upgrade, the Östringen site will manufacture and supply materials for various aircraft components, including the LEAP engine produced by CFM International, Airbus and Boeing.

Solvay said that the resin infusion processing technologies are being increasing used in the production of composite parts, which can be deployed by the aerospace industry to produce faster and higher volume processing of major parts. Last month, the company opened a new carbon fibre production line at its facility in Piedmont, US. The new facility has doubled Solvay’s capacity to produce a major raw material, which is used to make carbon fibre reinforced composite materials used in the manufacture of lightweighting composite materials in the aerospace industry.