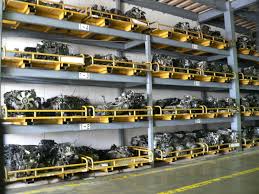 ThyssenKrupp started production at a new automotive components plant in Puebla, Mexico. The siet will assemble front axles for Volkswagen. The commissioning of this plant is a significant increase of the production capacity in Puebla. The existing assembly site had become too small. The acquisition of several new orders necessitated a capacity expansion. At the new 11,000 square meter site all logistics and assembly processes are now centralized under one roof.

Over 2,200 axis modules can be produced and delivered to the customer daily. ThyssenKrupp supplies axles for all Volkswagen’s model platforms in Mexico, including the Jetta, Golf A7 and Beetle. The new site employs around 240 people. ‘Mexico is one of the key growth countries for our global automotive business. We are growing with our customers, who mainly supply the export markets from there,’ says Dr. Karsten Kroos, CEO of the Components Technology Business Area, which among other things is responsible for ThyssenKrupp’s global automotive components business. Further investments are planned in Mexico this year to expand existing plants and build new ones.

ThyssenKrupp already produces components for the auto industry at four sites in Mexico. The product portfolio ranges from engine and steering components to springs and stabilizers to the assembly of axle modules. In addition to the new site in Puebla, ThyssenKrupp is currently building a further axle assembly plant 70 kilometers away in San Jose Chiapa. This plant will supply components to Audi. Production of the new Q5 model is planned to start there in 2016.

Axle assembly operations are highly synchronized with OEM assembly lines. Front axles are assembled at the new Puebla site in cycle times of in part 45 seconds and delivered just-in-sequence, i.e. each component is delivered to the customer at exactly the time it is to be installed in the vehicle. At the new plant in Puebla, the time required from receipt of the customer order to shipment of the complete axle is just 150 minutes.

Employing around 29,000 people, the Components Technology Business Area produces high-tech components worldwide for the automotive and machinery sectors. In the auto sector the product range includes assembled camshafts, cylinder head modules with integrated camshafts, crankshafts, steering and damping systems, springs and stabilizers as well as the assembly of axle modules.