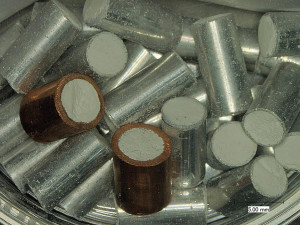 The chemical industry uses large quantities of packing materials. To protect the millimeter-scale particles against abrasion, Fraunhofer IKTS encapsulates them in a layer of metal that boosts their thermal conductivity by a factor of five.

Random packing materials are used in many chemical reactors and heat storage systems as catalytic support media or adsorbents. To ensure that these processes produce the desired results, the packing materials have to be able to conduct heat efficiently. This is not always easy, because the gaps between the millimeter-scale particles prevent heat from being conducted optimally throughout the packed bed. Chemical companies therefore have to build special heatconducting structures into their reactors. “This is time-consuming and expensive,” says Jörg Adler, a researcher at the Fraunhofer Institute for Ceramic Technologies and Systems IKTS in Dresden. Together with colleagues at the Fraunhofer Institutes for Machine Tools and Forming Technology IWU in Chemnitz and for Interfacial Engineering and Biotechnology IGB in Stuttgart, Adler has developed a concept that increases the heat transfer capacity of the packing material fivefold. Their concept involves encapsulating cylindrical filler particles in metal. The points of contact between the metal-encapsulated particles form a metal framework that enables heat to be conducted throughout the packed bed faster and more efficiently.

The scientists have conducted tests in the laboratory that prove that this efficiency gain is realizable, using a heat storage system consisting of an eight-liter packed bed of aluminum-encapsulated zeolite pellets. Adler lists the advantages: “The packed bed is heated to an even temperature more rapidly. It takes significantly less time to load and unload the heat storage medium. This makes it possible to enhance the efficiency of chemical reactions and hence increase product quality.” The researchers expect that it will be possible to obtain even better results using a metal with a higher thermal conductivity, such as copper. The particles of packing material used in the laboratory tests are five millimeters long and encapsulated in a layer of aluminum with a thickness of 0.25 millimeters. The scientists produce them using a specially developed process that could be easily adapted to mass production. The packing material is poured into long, thin metal tubes, compacted to prevent it from spilling out, and the tubes are then cut into sections to form cylindrical particles no more than a few millimeters in length.