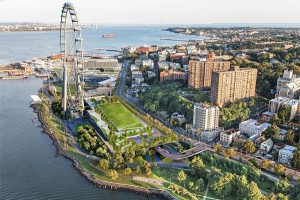 Walter Tosto, the company from Italy, specialized in the pressure equipment industry, will participate in the construction of the New York Wheel, the biggest observation wheel in the world together with the one that is to be completed in Dubai.  Luca Tosto and Made in Italy components from Abruzzo will be part of the future symbol of New York.

The impressive New York Wheel which as of 2018 will stand out in the north eastern area of Staten Island (St. George) will be constructed with structural components made by Walter Tosto. The wheel is 192 m high and has a diameter of 183 m and promises to become one of the Big Apple’s main attractions, like the Statue of Liberty and the Empire State Building. It will be made of components weighing 2 million kilograms produced by Walter Tosto in the Ortona plants in Chieti. The company, which is specialised in large pressure equipment, numbers over 550 employees, and has a turnover of around 100 million Euros and an Ebitda of 10%. With this project the company reconfirms the value of Made in Italy products in the world, and will become the ambassador of the Abruzzo manufacturing industry at an international level. 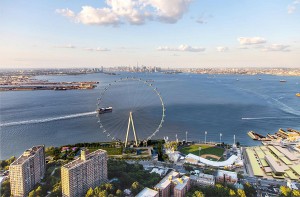 From the observation wheel it will be possible to enjoy a spectacular 360° view of the New York City skyline, of the Statue of Liberty, the Verrazano Bridge, and the New York Harbour. The New York Wheel will be respectively 57 and 51 m taller and wider than the London Eye (135 m high, and 132 m wide). The New York Wheel will accommodate up to 1,440 people per rotation (40 per capsule) and will welcome around 3.5 million visitors per year. The business resulting from this worldwide attraction will have a great impact: it will contribute to boost the economy of one of the most important and symbolic business cities in the world. Positive results will be achieved in terms of employment as well, as it is expected to create 350 jobs during construction and 600 permanent jobs as well. The observation wheel was proposed by the New York Wheel LLC in response to the New York City Economic Development Corp’s request for bids for projects that would increase economic growth, boost tourism, and create jobs on Staten Island. 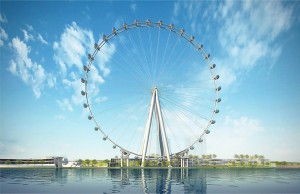 In order to efficiently manage the design, production and installation of the wheel, a joint venture formed by Mammoet and Starneth, the two most qualified companies in the sector was set up. This choice consolidates a successful and already proven partnership: the two companies have in fact already cooperated in the past on the construction of the biggest observation wheel in Europe: the London Eye. Mammoet is the world’s leader in solutions for lifting, transportation, installation and decommissioning of large and heavy structures.
Starneth is an engineering company that is highly specialised in the design and construction of huge structures and observation wheels.
The New York Wheel represents one of the most complex creations in the world for its exceptional weight and dimensions. The various components of the structure have been ordered by Starneth and Mammoet to companies located in various nations.

The placement of the foundations is currently under way. The assembly phase will take place between May and October 2016, since this is the most appropriate period for such activates which are expected to be completed in 2017. Walter Tosto will provide the components needed to support the whole structure. The construction will be carried out by following the strict environmental sustainability principles of today’s building standards, thus employing several alternative energy sources available on the Island: wind, water, and sun.
«It wasn’t easy to obtain such an important order», said Nicola Trivulzio, Sales Director of Walter Tosto, who explained the factors that contributed to the success of the company with respect to the competitors: the ability to fulfil a strict deadline of only eight months, the robustness of the company, its know-how, its competences, and especially the valuable and appreciated technical support provided to the customers Mammoet and Starneth since the design phase. Moreover, the availability of large spaces for the manufacturing activates and direct access to the sea of the plant located in the port of Ortona were in favour of Walter Tosto.

For the operative activities, requiring precision and an accurate study of the materials, Walter Tosto will employ the new and recently inaugurated Milling Machine Waldrich Coburg, which will allow the machining of huge steel pieces, which will constitute the first job order of the machinery. «It’s a great challenge for our company», said Luca Tosto, Managing Director of Walter Tosto SpA: «Contributing to the construction of the New York Wheel is a great achievement, and we are immensly proud of this. The Made in Italy from Abruzzo will be part of the future symbol of New York».