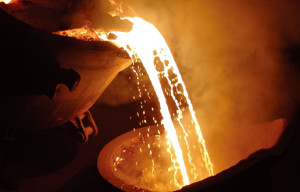 According to MEPS research institute, European demand for flat steel products is lowing. Prices have continued to fall, together with shrinking raw material costs.

Low demand, together with shrinking raw material costs, has led to declining prices in Belgium. Distributors from the Netherlands and Germany are selling cheaply across the border, threatening resale values. Service centres are desperate to empty their stocks before the financial year finishes at the end of December.

In Germany, quarterly contracts for period one 2015 have not been finalised completely. Some business has already been concluded for January at prices below those published in the November issue of MEPS European Steel Review. The downward pressure is not from third country offers but from cheaper raw materials.

Basis figures continue to tumble in Spain, where real consumption is stable but buyers are delaying their purchases as they watch the constant cuts in the steelmakers’ outlay on raw materials. They anticipate lower steel prices in the future.

Activity remains at a subdued level in France. End-users are waiting until the last minute to order steel, while demand from stockholders is weak. Mills have short delivery lead times, which allow distributors to keep inventories low. Activity derived from the auto sector has been slightly better in 2014 than the previous year but still remains quite modest. The rest of industry has already agreed a discount for December deliveries. Some buyers foresee the possibility of further slight erosion for the first trimester. Purchases will only be finalised just before the holidays. Global Steel Market

The global supply surplus on the nickel market has fallen this year. Due to declining supply in major producing countries, next year’s supply is expected to be below demand for the first time in five years. Nickel demand, on the other hand, is expected to grow further. This is partially driven by increased demand from the global demand from the steel industry – the largest consumer of nickel.

Iron ore prices are now at levels last seen during or before the financial crisis of 2008/2009, signalling not only the impact of a glut of supplies but deeper weakness in parts of the global economy. The raw material, used to make steel, is among the most sensitive to economic health.