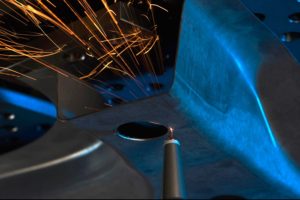 Technological Evolution and innovation are often signs of market demands: today there is a real interest in laser cutting materials of high reflective power such as copper and brass which are increasingly involved in industry, but also gold, silver, and many precious materials. These refer to a niche product field, such as fashion and jewelry.

The use of lasers, much loved by science fiction, has become increasingly actual in manufacturing for a wide range of applications, precisely because of the principles which it is based on and which make it so versatile. In laser processing, the energy transported by the photons is focused on the surface to be treated. When its intensity is high enough, the material is melted, and small portions of the surface are vaporized: when the process is well controlled, it is possible to get the desired results. In the industrial field, laser is widely used in cutting operations on materials that can be metallic, non-metallic and even composite, in the latter case precisely because of the abrasive nature of the material and the particular (favorable) conditions developed during laser processing.

However, there is one principle related to physics, optics in particular, which concerns a wide range of materials of industrial interest and which could be a problem for laser cutting: the high reflective power. Why? Because in laser cutting the important physical parameters are the reflective power of the material, the thermal conductivity of the workpiece surface, and its latent heat in melting and evaporation. The lower these properties are, the better the process efficiency,. But, if this is not the case, the process can be highly inefficient and create critical conditions that make it industrially unworkable.

In industrial production CO2 lasers have made the well known history and are still widely used, but recently, they have been often replaced by the more modern (and in some ways more performing) technology of fiber lasers. The reason for this technological “turn” is essentially linked to two factors: efficiency and ease of use. In fact, whilst CO2 lasers allow the cutting of high thicknesses with excellent cutting quality, they are unfavorably limited in terms of energy transfer through an optical chain (mirrors, lenses, etc..) that requires constant cleaning and cooling. “Modern fiber lasers, in addition to having considerably reduced the gap with CO2 lasers as regards performance, do not require an optical chain as the electromagnetic energy transfer is done by the optical fiber, allowing for necessary flexibility for an industrial process.- explains Marco Montani, process engineer specialized in laser technologies – The higher energy efficiency of a fiber laser (wall plug efficiency of 25-30%, compared to 8÷10% of CO2 lasers ) guarantees interesting savings, and that’s why research and development is now mainly focused on this technology: fiber lasers are revolutionizing the industrial processing field, offering an unparalleled combination of performance, reliability and economic advantages”.

Therefore, fiber lasers are growing rapidly, with a continuous trend that is shown in new types of applications, previously difficult to cope with, as is the case with highly reflective materials.

High reflective materials: is it a problem?

Going back to high reflective materials, why are they problematic for the laser? Problems arise from their properties and are linked to the laws of physics, and of optics in particular, according to which each beam of light is reflected and refracted (as well as absorbed), in a more or less important way, depending on the reflective power of the surface on which it affects. Therefore, if the surface has a high reflective power, the incident beam will be largely reflected; the laws of physics also will always show us the direction of reflection. This is the key point to understanding the problem: the reflected beam, or a part of it, follows the direction that would bring it back to the source. However, the source is designed to send and not “receive”, so this phenomenon influences its integrity. Known as back-reflection, this phenomenon is extremely dangerous because it causes frequent process interruptions, which can preclude the processing of certain materials, or lead to poor quality finishes, and finally can damage permanently the laser itself.

In order to manage  the back-reflection phenomenon, some fiber laser manufacturers suggest that users should modify the beam alignment or cutting “recipes” to minimize beam return to the source. However, this approach is often uncomfortable, if not impossible to follow because it risks degrading the performance of the source and failure to provide sufficient protection.

In order to protect the laser sources, they are equipped with a sensor system able to intercept the return beam, quantify the light intensity and, if beyond the allowed threshold, switch off the laser, following the software isolation technique. This type of protection, while failing to protect the laser from catastrophic damage in most cases, risks compromising the processing.

Another way to manage this problem is hardware isolation: the internal architecture of the laser is able to dissipate the heat generated by the reflected beam before it can damage or destabilize the laser itself. This guarantees the uninterrupted processing of high reflective metals as well, enabling high cutting quality and industrially attractive productivity to be achieved.

As an example, the hardware insulation now allows laser cutting, with a power of 3kW, with a thickness up to 12 mm for stainless steel, aluminum and brass, and 10 mm for copper. With the fast technological evolution these thicknesses are constantly growing, thanks also to the development of increasingly flexible cutting heads and machines able to cut a wide range of thicknesses and materials.

Today, laser cutting is an important process in the sheet metal working field, so much so that it has largely surpassed the use of conventional technologies. It is a process obtained with focused electromagnetic radiation beams, and it is a process where the separation takes place with high temperatures, due to the heating and subsequent quick melting of the surface in question. The laser beam, once it has penetrated the material, performs the cut following its movement: the movement of the part to be cut or both, performing the desired cutting geometry.

The molten and vaporized material is removed from the cutting surface by the flow of a gas that is released coaxially to the laser beam, which actually directly affects the cleanliness and quality of the cut. The gases used vary according to the materials to be cut.

Some physical parameters are of remarkable importance, i.e: the reflective power, the thermal conductivity of the surface to be cut, and its latent heat (both melting and evaporation): the lower these properties are the more efficient the process will be.

The characteristics of the laser also play a fundamental role in the cutting process: power, wavelength, modal quality and spot size. The power has a directly proportional influence on the thickness of the material to be cut, and the cutting speed.

This report also affects the economics of the process: it is always necessary to find the right compromise between investment in hardware and productivity (in which any subsequent treatment that may be necessary to obtain the finished product must also be considered).

The problems related to the management of laser processing require an in-depth knowledge of the technology, not just of applications. With this idea in mind, Optoprim was born, first in France, but since the end of the 90s also in Italy, with headquarters in Monza and a branch in Rome, it presents itself as a supplier of technologies and services in the field of photonics and laser processing. The peculiarity of Optoprim is not to build machines, but to carry out its commercial activity in an exclusive way, offering application solutions and showing how products can be used. Thanks to a perfectly equipped laboratory, Optoprim carries out studies and research on laser applications and process optimization, demonstrating expertise in various sectors; from industrial to scientific, medical, aesthetic, military, solar, and biotechnological, to name just a few.

Today laser processing of highly reflective materials plays an important role in many production environments, but many solutions suffer from an intrinsic sensitivity to back-reflection of light, which can cause an unsteady process, automatic disruptive shutdowns, or even catastrophic plant failure. nLIGHT, proposed in Italy by Optoprim, has introduced hardware protection against back-reflection during the process phase (back-reflection) since its first fiber laser production, allowing the uninterrupted processing of highly reflective materials. Corona™ lasers, nLIGHT’s latest laser series with patented technology (which modifies the modal properties of the laser beam resulting in advantages in cutting and welding applications), also maintain this high back-reflection tolerance, and are now widely used for cutting and welding of copper and other reflective materials. All nLIGHT fiber lasers have been designed to be repaired in the field, even in production environments. In addition, integrators can be trained to diagnose and repair lasers, ensuring maximum uptime of their machines and reducing plant downtime.