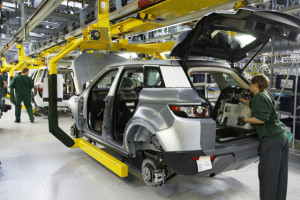 Car giant Jaguar Land Rover is investing a further £120 million in its Solihull plant. The announcement was made at the Frankfurt Motor Show where JLR showcased its new F-Pace model. Built alongside the Jaguar XE at the company’s flagship Solihull manufacturing plant, Jaguar’s new model has resulted in an additional £120 million of investment in the facility. This takes the total amount invested in Solihull to £620 million – the largest investment in the 70 year history of the plant.

Jaguar Land Rover chief executive, Dr Ralf Speth said: “We are pushing the boundaries in design, engineering and manufacturing to deliver outstanding cars. Our investment in the development of the F-Pace, its industry leading architecture and the UK plants which support its manufacture provides a clear signal that Jaguar Land Rover is committed to Britain and advancing the skills and capability of the industry”.