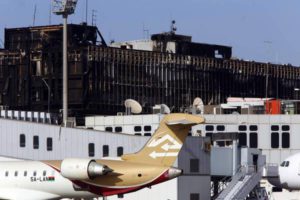 A consortium of Italian companies operating in the airport sector has been signed for the reconstruction work at the beginning of 2017 of the international airport of Tripoli, which was seriously damaged during the crisis in Libya, the online website of the Libya Herald quoted the transport minister of the Government of National Accord (GNA), Milad Matoog, as saying Monday.

The announcement during a transport forum organized in Tripoli by the Libyan African Aviation Holding Company, which has airliners Afriqiyah Airlinesand Libyan Airlines, was criticized by the Parliament of Tobruk (HOR), whose member Rujban Salah Suhbi said any contract signed by the Libyan State for reconstruction of the international airport of Tripoli must be considered illegal and unconstitutional if it is not adopted according to the necessary procedures.

In October 2016, a consortium of Italian companies visited the airport of Tripoli and the Libyan airport authority said the Italian consortium would make an offer to rebuild the structure, which was seriously damaged in clashes between the militias of Fajr Libya and Zintan in July 2014.