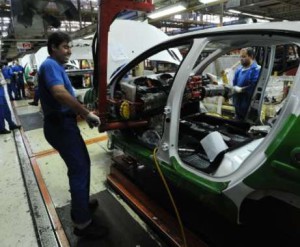 Iranian media reported that the country has suspended plans to cooperate with Peugeot and is instead preparing to take up talks with German and Italian auto majors to encourage them to invest in its automotive industry.

Representatives from the French automobile industry were also striving to restore their previous share in the Iranian auto market. French Peugeot wants to establish a 50-50 joint venture with Iran to produce cars. Iranian officials said the French auto giant is already in advanced stages of talks to provide automobile parts to the leading Iranian carmaker, Iran Khodro.

Iran Khodro suspended plans to team up with Peugeot and began talks with other companies including Germany’s Volkswagen, the daily added.

German company Mercedes-Benz plans to purchase a 30 percent stake in Iranian Diesel Engine Manufacturing Company in order to produce automobiles in the city of Tabriz.

The automobile industry accounts for nearly 10 percent of Iran’s gross domestic product. The latest data shows that Iran ranks 18th on the list of the world’s top auto manufacturers. However, the country’s automotive industry needs modernization after years of sanctions.

Sanctions on Iran hit the automotive industry hard, slicing production by 1 million units from its peak of 1.6 million in 2011 and leading to 100,000 job redundancies.

Iran is one of the biggest producers of cars in the region.