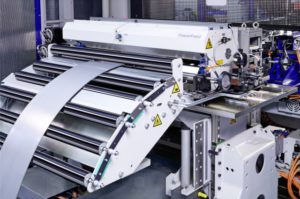 Car manufacturers attach great importance to the precision of the parts they source. Suppliers like Fischer & Kaufmann (Fiuka) are very much aware of this. Based in Germany’s Sauerland region, the company recently improved the accuracy of its products and extended the life of its dies with a new TwinServo press supplied by Schuler.

“We already have a number of presses from Schuler and Müller Weingarten in operation,” reports Site Manager Tobias Heutger: “The quality and performance are always exactly right for us.” With the new TwinServo press, Fiuka now has the most modern line available on the market. “We are generally open for new technologies,” says Tobias Heutger. “Ultimately though it was the price-performance ratio which was decisive.”

External drawrods reduce slide tilting
Compared to conventional lines, for example, slide tilting is reduced significantly by TwinServo presses. This effect results from the machine’s design: as the drive unit is no longer located in the crown but under the press, the slide is pulled down by the drawrods. Together with the play-free guides, this not only improves the precision of the manufactured parts, but also significantly enhances process reliability and prolongs die lifetimes. In addition, the externally mounted drawrods ensure that the machine can be used to apply larger off-center forces. 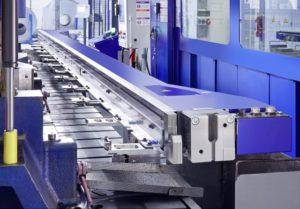 Boasting a press force of 1,600 metric tons, the new line has been at the Finnentrop site since December last year. And although it is still not running at full capacity four months later, there are already indications of improved productivity: “Compared to our conventional presses, we can more than double the number of strokes per minute from a maximum of 16 to 34 now,” says Site Manager Tobias Heutger.

The high rigidity and low deflection of the overall system also reduces the blanking shock, which in turn means that the machine is much quieter. A further decisive factor for Fiuka was the low height of the TwinServo press, due to its missing crown.

New transfer system raises output
However, not only the press itself is a technological innovation but also the line’s automation system: in addition to the coil line and highly dynamic zig-zag roll feed (PowerFeed) for optimized material usage, Schuler also supplied a newly developed transfer system. 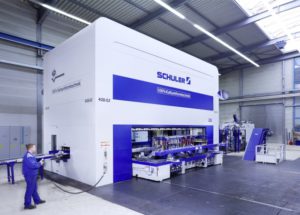 In the so-called IntraFeed system, the grippers responsible for transporting the parts are not mounted on rails but on movable carriages with their own drive units. This significantly reduces the length of the transfer rails and thus of the entire line. One positive side-effect is that the reduced mass being moved results in higher output performance.

Fiuka was so impressed by the TwinServo press and IntraFeed that it already ordered the second machine of this type from Schuler last year. The identical line is currently being delivered.