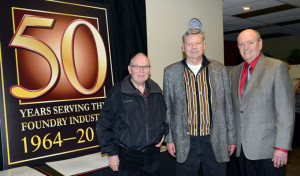 In 2014 Hunter Foundry Machinery Celebrates Its 50th Anniversary: since 1964 Corporation’s machines have evolved the foundry industry with many refinements and technological improvements.

With the invention of the first gravity-filled Automated matchplate molding machine, Al Hunter single-handedly launched the foundry world into a new industrial revolution. In 1963, mechanical engineer William “Al” Hunter created the first HMP-10 in Morton Grove, IL. The new machine streamlined laborious metal casting processes by offering foundries unimagined new production capabilities. With it, an operator could produce as many molds in one hour as most molders could produce, in an entire day, on a jolt-squeeze machine.

Today known as Hunter foundry Machinery Corporation, the company has grown its reputation during the past 50 years as the premier developer of advanced matchplate molding and mold-handling solutions for the foundry industry. Operating from its world headquarters in Schaumburg,  since 1968 Hunter continues to produce innovative solutions and technologies. Sales offices in U.S., India, China, Brazil and Europe ensure its position as the world leader in matchplate molding and mold handling.