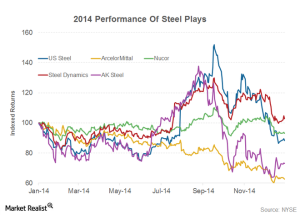 Year 2014 has been a turbulent year for global equity markets, but 2015 started on a good note. Growth was finally getting back on track. It looked like the US was set to grow at a decent pace. Europe was also resolving its sovereign debt woes. However, China was slowing down. At large, the world markets seemed to accept this new normal for the Chinese economy.

Steel industry’s 2014 performance changed several times. However, most steel plays delivered negative returns for investors. Only Steel Dynamics (STLD) managed to deliver positive stock market returns in 2014. It closed 2014 with ~2% yearly gains. Currently, it’s a top holding of the SPDR S&P Metals and Mining ETF (XME). ArcelorMittal (MT) was one of the worst performers on Wall Street. It lost ~40% of its market capitalization in 2014. AK Steel (AKS) wasn’t far behind. It lost more than a quarter of its market capitalization last year. U.S. Steel Corp. (X) lost ~12% in 2014. Even with its impeccable dividend yield, Nucor (NUE) couldn’t deliver positive returns to shareholders in 2014.
Series overview

However, 2014 didn’t start on a positive note for steel plays. The US faced one of the most severe winters in recent history. This led to unplanned outages at some of the steel plants. According to ArcelorMittal (MT), weather-related expenses were $150 million in the second quarter. This was a negative impact.

According to estimates, steel demand in the US grew by ~5% in 2014. Please be aware that final steel consumption figures will be released sometime in 2015. The above chart shows the steel consumption forecast. The World Steel Association released the forecast in its short-term outlook.

In 2014, the growth in US steel consumption was led by strong demand from end consumers of steel. Steel demand from the automobile and construction sector kept the steel plays’ orderbooks in good shape.