Orders received by the German machine tool industry in the first quarter of 2020 were 25 per cent down on the same period last year. Orders from within Germany fell by 22 per cent. 27 per cent fewer orders were received from abroad.

“Global demand for machine tools fell sharply last year due to various challenging factors, but it fell still further at the beginning of the current year,” said Dr. Wilfried Schäfer, Executive Director of the VDW (German Machine Tool Builders’ Association), Frankfurt am Main, commenting on the results. Only a proportion of the corona effect is currently visible in the books, he pointed out. It will take a few months before the full effect becomes apparent, explained Schäfer.

In the metal cutting sector, which serves a broad customer base, the decline in orders is more than double that of the more project-driven metal forming sector. Domestic business here in Germany is currently offering a small ray of hope. It rose by a surprising 4 per cent in March. This was mainly due to project business in the press-making segment. 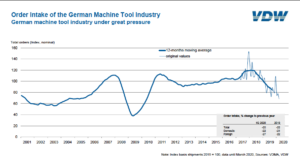 The only region in which orders were up in the first quarter was America, especially Mexico. This was due to automotive projects. Six of the top 15 markets posted increased order levels. These were the USA, Mexico, Russia, Japan, Canada and the Netherlands. “Russia was once the third largest market for our industry. Economic sanctions, however, have resulted in a sharp decline in business. It is all the more gratifying to see a revival from Russia in the current crisis,” reported Schäfer.

Sales revenue also fell – by 18 per cent – in the first quarter. “This is exactly in line with the 2020 forecast we issued in February of this year,” Schäfer continued. “However, it is already apparent that the order figures do not reflect the full extent of the decline, which will eventually be even more severe. Capacity utilisation in the industry also fell significantly by 18 points to 64 per cent
between January and April. We currently expect the situation to improve in the second half of the year, provided there is further scaling back of the lock-down arrangements and that production returns to normal. This will determine where the industry will be at the end of the year,” he concluded.