I.M.V. Presse is a company with a high technological profile, which is aimed at an international medium-high level market. The company specialises in developing a wide range of technical solutions including an exclusive system that makes it possible to keep plenty of energy available for the deformation phase, thus reducing consumption and cutting down on investment and movement costs of a traditional servo presses. 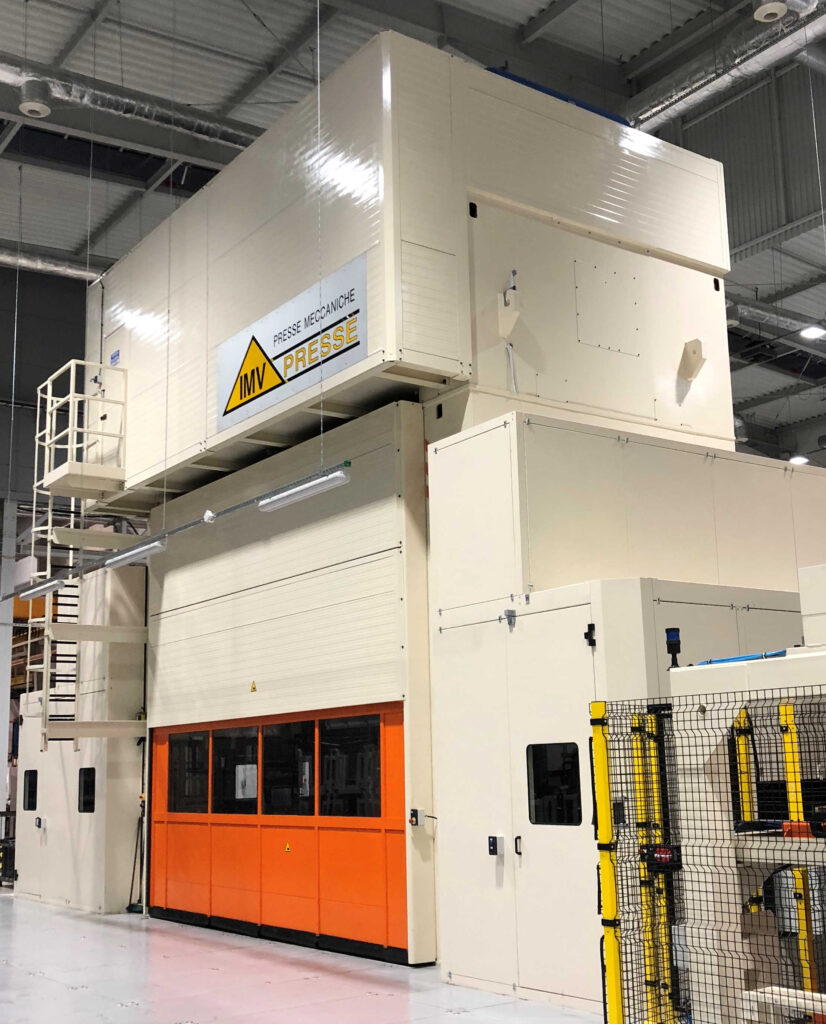 Servo Kers is an exclusive solution developed by I.M.V. Presse, resulting from years of experience in different solution drive, now applied to the Servo-Drive presses. This system is developed to minimize the negative aspects of the traditional Servo Drive presses, to reach the best compromise between cost and benefits. The presses of the “Servo Kers” series are ideal for transfer production plants of medium-large dimensions, where the drawing with the use of lower die-cushion or nitrogen cylinders require a lot of energy. The innovation applies two patents conceived by I.M.V.Presse, for the safe realization and control of the developed system.

To understand better the advantages of Servo Kers is better to know before the traditional servo press, reading below the shorter description.

The traditional concept of Servo Drive application to the mechanical presses is to replace the AC inverter motor, fly-well and clutch unit with one or more big torque motors and an electronic energy management system completed by many capacitors and other buffer motors. This kind of application gives to the traditional servo-drive presses the freedom of movement profile, programmable.

The most important negative aspects of traditional Servo Drive presses are:

Servo Kers, how is it made?

Kers meaning Kinetic Energy Recovery System. This application is developed to minimize the negative aspects of the traditional Servo Drive presses, to reach the best compromise between cost and benefits. The solution takes the better aspect from the different technology and combine them, saving the better positive aspects and removing the negative ones. Of course, is not avoidable surrender to some function, but these are only a few specific functions normally exploited by a minimum user number, for which will remain the choice of the Standard Servo Drive.

-Synchro: during part 1 the speed of the servo-drive adapts his profile of acceleration, speed and deceleration to optimize the cycle to the time request by feeder or transfer.

-Classic: produce with normal cycle like a classic mechanical press, without deceleration.

-Reverse: in case of necessity, the press can open at reverse mode without switch-off the main motor to reverse the fly-well.

-Stroke adjustment to adapt the stroke length to the different tools hight.

There are many positive points of Servo Kers.

-Freedom of the slide profile movement: first of all the user has the possibility to choose the speed in the forming area of the cycle, than he has the possibility to choose the speed of the other part of the cycle, like during opening or closing of the ram. Like in a normal Servo Drive press the user can also synchronize the opening and closing part of the cycle to the request time of the automation, to optimize the complete cycle of the press-line.

-Possibility to not use the deceleration of the slide speed at lower point having the full press power, while the Servo Drive lose his nominal power if not decelerate. If required, the Servo Kers can be managed like a normal mechanical press.

-Stroke adjustment allow to adapt the ram stroke to the tool opening high, without the necessity of the pendel function of the traditional Servo Drive press. So, no brake and re-acceleration meaning less consumption.

-Increase the available energy and to have this availability at lower speed than normal, resulting a very larger range than a traditional press.

-Very similar performances in productivity as a Servo Drive press or Link Presses.