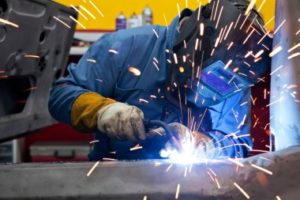 Reps. Mike Kelly, R-Pa., and Ron Kind, D-Wis., with Sens. Chris Coons, D-Del., and Pat Roberts, R-Kan., have introduced the Invent and Manufacture in America Act, a bill that would give a tax credit to companies that not only conduct research and development, but also manufacture products resulting from that R&D as well.

Kelly argues that incentivizing work is one of the main drivers of entrepreneurial success and would be a boon to a U.S. manufacturing sector that has struggled to keep up in recent years. Since 2001, the U.S. has lost more than five million manufacturing jobs while only 1 in 10 Americans work in manufacturing, down from 1 in 4 during the 1960s, when U.S. manufacturing hit its peak.

“I’m from the private sector,” Kelly said. “What we’ve found that works best: If you want to do something, you usually incentivize any good behavior. So, we’re looking at the loss of jobs we’ve had — manufacturing jobs, the number of manufacturing plants have closed, and when you ask them why is it that you’ve closed … why did you choose to actually assemble it someplace else, it’s usually because of a more favorable tax situation.

“Most of the stuff since I’ve been in office I’ve looked at when we’ve talked to people as to why they’re leaving, it’s because they feel that the policies that have come forward make it harder for them to be profitable and harder to exist,” he said.