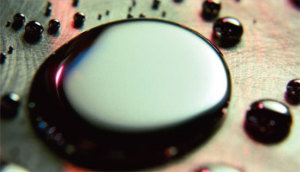 Scientists at the Academy’s Technical Institute of Physics and Chemistry’s Key Laboratory of CryoBiomedical Engineering developed the 3D printing technique to avert the metal alloy ink from oxidation. The metal ink melts at a lower temperature which is slightly above room temperature, allowing quick development of conductive 3D metal objects. The alloy consists of tin, indium, zinc and bismuth. Syringes are used to inject droplets into cooling fluids which later form into a solid structure.

The problem with metals above room temperature that could block the syringes was solved by retaining the temperature of the syringes using a controller. Conventional 3D metal printing method uses metal with high melting point, requiring the use of air cooling techniques which is time-consuming. Scientists said the new method is much better than conventional air cooling. They said metal that melts at low temperature has great potential uses for cooling computer chips, and also in other areas such as thermal interface and microfluidics. “Such material has also been proposed as printing ink with evident value in direct writing electronics and 3D printing technology” the researchers said.

The field of metal printing is expanding and its use encompasses a wide range of areas, from electronics and medical devices to supportive structures.