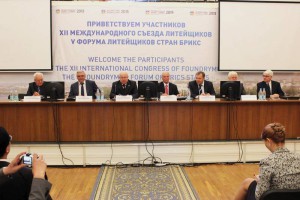 The BRICS Foundry Forum 2015 in Nizhny Novgorod, Russia, strengthened cooperation among BRICS countries (Brazil, Russia, India, China and South Africa). The representatives of national foundry associations signed the constitution for establishment of the interregional BRICS Foundry Association, which is the project of multilateral, interregional, industrial cooperation and the first industrial association of BRICS countries.

The BRICS Countries, who cover almost 60 % of the world production of castings held their 5 th conference not only to meet again, but to support the BRICS countries to be more competitive and find out possibilities to strengthen their position.

The aim of the association is the consolidation of national foundry enterprises and organizations of BRICS countries for international industrial cooperation development and assisting to implementation of national development plans for providing BRICS economies sustainability as integral part of global economy.

Foundry production is a basic pillar of machine building and machine tool industry: 30-50 % of mass of tools, machines, equipment, tools etc. consists of foundry products. At the same time foundry enterprises closely connected with metallurgy production and technology by providing foundries with metal raw materials. Thus, the foundry industry is a vital technology chain in production cluster “Metallurgy-Foundry-Machine building” which defines rate of industrial development of real economy national sector and which is considered as one of priority, key factors of country sustainable economy.