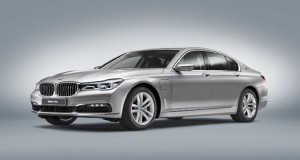 At the 2016 edition of New York International Auto Show (from March 25th to  April 3rd), BMW will feature a number of models featuring composites, including two models (the BMW M760i xDrive and BMW ALPINA B7 xDrive) making their North American debuts.

CFRP has become a staple of many BMW vehicles. The BMW M760i xDrive is the sixth generation BMW 7 Series (M7) – which featured the first large-scale application of highly innovative carbon fiber materials and recycling products in the premium car segment.

BMW refers to this application as “Carbon Core,” which according to BMW supplier SGL Group “leads to substantial weight reduction and also helps to further enhance the driving dynamics by lowering the vehicle’s center of gravity.” Specifically, the concept cut 190 pounds more than models in BMW’s 6 series. The ALPINA B7 xDrive also incorporates the CFRP Carbon Core body.

In addition to the 7 series, BMW’s line-up for the show also includes the M2, X4 M40i, X1, 330e, and i8. The 7 series and i8 in particular make extensive use of CFRP, as does the M2, which was recently adapted to be a safety car for an international racing series. The M2 made its world debut at January’s North American International Auto Show in Detroit, which also featured a wide range of composite applications.

Shortly before the show, the winners of 2016 World Car of the Year awards will be announced. Recently, the 7 series was named a finalist in the Luxury Car of the Year category.

Before the models arrive in New York, they will be seen at the Geneva Motor Show on March 13. The Geneva show will also feature the Lexus LC 500h made with CFRP, McLaren Automotive’s P1™ made with CFRP, and BMW’s i8 Protonic Red Edition with a CFRP passenger cell.