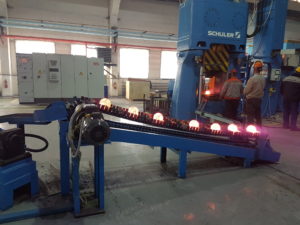 In the first step of the production process, round steel bars are cut into pieces by a circular saw and heated by induction. Next, a robot arm takes the red-hot parts from the conveyor belt and inserts them into the Schuler hammer. The forged steel balls are then removed by an employee from a discharge chute integrated into the die area. After their quenching and hardening, as well as the subsequent tempering process and quality control, the grinding balls are ready for use.

As a system supplier, Schuler has provided the whole line including the dies and lubrication within seven months. The assembly began in November 2016, configuration and testing of the machinery was completed on December 14th, 2016. In the meantime, DMP has commissioned the lines. A new steel ball is produced by each line every eight seconds; the annual capacity of both lines is up 25,000 tons per year. 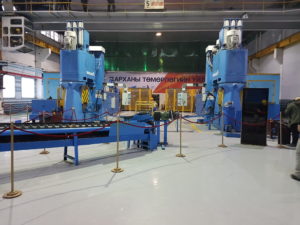 “Our customer had no experience in forging, so we introduced him to this new technology step by step and provided operator, maintenance and security training”, says Markus Bieg, head of Schuler’s “Industry” division in Weingarten, Germany. “Via Remote Service, we can assist DMP 24/7.” This is Schuler’s first project in Mongolia. With the help of the customer, visualization as well as documentation have been translated into local language.

According to DMP, the project will open new opportunities to the development of metallurgical industry in Mongolia.