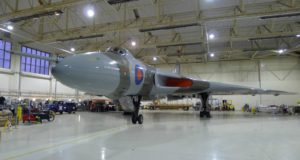 Engineers from the University of Sheffield’s Advanced Manufacturing Research Centre (Amrc) are helping to preserve the legacy of the iconic Vulcan XH558 bomber by creating a ‘virtual tour’ of the aircraft that will be used in a new educational programme.

The Vulcan, an iconic example of British aerospace innovation, was restored by the Vulcan to the Sky Trust, returning the aircraft to flight in 2007, 14 years after it was retired from RAF service.

Having completed its last flying season in 2015, witnessed by thousands in the UK and abroad, the aircraft is now permanently on display at Doncaster’s Robin Hood Airport, where it will become the centrepiece of a new educational programme planned by the Trust.

The programme has been designed to show young people what can be achieved with a career in engineering and inspiring a new generation of scientists, designers, engineers and aviators.

Amrc metrology engineers approached the Trust to offer their state of the art scanning and measurement capabilities to capture the aircraft in a 3D model that they then used to create a ‘virtual tour’ of the legendary bomber.

Richard James, Metrology group manager for the Amrc, said: “Vulcan to the Sky want the virtual tour to form an integral part of their educational initiative. It will help the Trust enhance their public outreach, allowing unprecedented access to the aircraft, with the public being able to see all around and inside the aircraft in great detail.”

The group scanned the aircraft using a spherical scanner (Surphaser) to capture multiple point clouds, from which data can be used for reverse engineering projects such as 3D printing a model. They then use a 360° NCtech iStar panoramic camera supplied by MD 3D, a UK company who provide metrology devices, to create the related virtual tour imagery, and also allowing for colourisation of the point cloud for ease of use when viewing.
The technology and process used to scan the aircraft is commonly utilised in the manufacturing sector to create factory layout simulations, for large volume scanning and processing of large amounts of scan data.

The metrology group have applied this technology to projects outside the manufacturing sector as a way to preserve historical data, recently scanning a medieval ossuary at Rothwell Charnel Chapel and Ossuary Project in Nottinghamshire. The data has provided a virtual model to assist archaeologists in preserving the site for future generations.