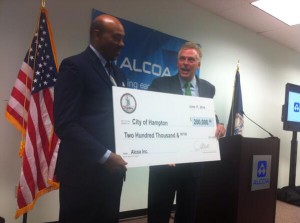 Aerospace manufacturer Alcoa is investing $25 million at its Alcoa Power and Propulsion plant in Hampton, Virginia (US) to star a process technology that cuts the weight of its highest-volume jet engine blades by 20 per cent and significantly improves aerodynamic performance.

“We are deploying a state-of-the-art technology that will significantly improve the performance of some of the best-selling jet engines in the world,” said Alcoa chairman and CEO Klaus Kleinfeld. “This technology and investment further demonstrate how Alcoa is executing on our strategy to aggressively capture demand in the fast-growing aerospace market.”

Alcoa will add equipment for a new production line and modify existing machinery at the Hampton facility to produce the blades. The company will use the latest in advanced manufacturing technology such as robotics and digital x-ray for enhanced product inspection. The expansion has just begun and is expected to be complete by the fourth quarter of 2015. The company expects to add at least 75 new, full-time employees over three years.

Alcoa developed this process technology, called Enhanced Equiax (EEQ) casting, following five years of research and development at the Alcoa Power and Propulsion Research Centre in Whitehall, MI. The Alcoa Technical Centre, the world’s largest light metals research and development centre based outside of Pittsburgh, PA, also supported this work. Made primarily using nickel-based superalloys, the lighter and more aerodynamically efficient blades can be used to retrofit existing or build next-generation aircraft engines, such as the latest engines for large commercial aircraft, including narrow- and wide-body airplanes. Engines for narrow-body aircraft are among the top selling jet engines in the world.

“Alcoa has been a solid corporate institution in Hampton for 40 years, and this major investment in new technology and the launch of a new product line will ensure the longevity of its operation for decades to come,” said Governor Terry McAuliffe. Alcoa will receive approximately $2 million in state and local incentives and an additional $1.3 million exemption on sales and use tax for selecting Hampton for this investment.

This investment supports Alcoa’s strategy of profitably growing its aerospace business, which had revenues totaling $4 billion in 2013. The company holds leading market positions in aerospace forgings, extrusions, jet engine airfoils and fastening systems and is a leading supplier of structural castings made of titanium, aluminum and nickel-based superalloys, which are produced by its downstream business, Engineered Products and Solutions (EPS). The company also holds leading market positions in aerospace sheet and plate produced by its midstream business, Global Rolled Products (GRP). The company’s value-add businesses, comprising EPS and GRP, accounted for 58 per cent of Alcoa’s first quarter 2014 revenues and 76 per cent of the company’s total segment after-tax operating income.