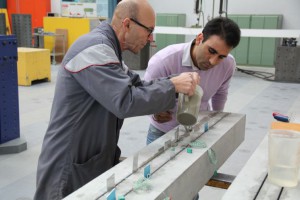 Empa researchers led by Christian Leinenbach of the Joining Technology and Corrosion Laboratory have now succeeded in developing a novel iron-manganese-silicon Shape Memory Alloy (SMA) which is activated at just 160° C (instead of 400° C), a temperature much more suitable for use with concrete, in building industry. The material science researchers “designed” a range of virtual alloys using thermodynamic simulations, and then selected the most promising combinations. These were then manufactured in the laboratory and their shape memory characteristics tested, with great success. Several of the new materials met the construction engineers’ requirements, an important milestone on the path to providing economic shape memory steel alloys for industrial applications – in other words, manufacturing them by the ton.

Christoph Czaderski, of Empa’s Engineering Structures Laboratory, believes that iron-based SMA materials have a promising future in the building industry since the process of pre-stressing is simpler and therefore cheaper than in conventional techniques. In addition they may allow engineers to create pre-stressed structures which are impossible or very difficult to achieve using conventional techniques. These include the use of short fibre concrete, near surface mounted laminates, column wrapping and ribbed armouring steel. A feasibility study financed by the Commission for Technology and Innovation (CTI) recently showed that it is possible to produce the new alloys on an industrial scale, not just a few kilos for laboratory use. The manufacturing process has been developed in collaboration with Leoben University (Austria), the Technical University Bergakademie Freiberg (Germany), and the German company G. Rau GmbH.

The working of cast ingots, each about 100 kg in weight, into thin strips around 2 mm thick or ribbed armouring steel rods at temperatures over 1000° calls for high degree of technical knowledge, and the appropriate infrastructure. The working process also needs to be adapted for use with the novel alloys.

To carry forward the developments made at Empa, a start-up company, re-Fer AG, has been set up. This will in future produce and distribute iron-based SMA for the construction industry. The cost of the new products is expected to be about the same order of magnitude as that for stainless steel based materials.

Shape memory alloys, or SMAs, have the important feature to return to their original shape after being severely deformed, either spontaneously or following the application of heat. This makes them useful materials, not just for making spectacle frames but also for technical applications such as thermostats, stents and micro-actuators. Other applications in the construction industry are conceivable too, for example in the reinforcement of bridges.

If a concrete beam is cast with reinforcing rods made of an SMA material, these can then be “activated” through the application of heat. They attempt to return to their original shape, but because of their concrete sheath they cannot do so, thus exerting a pre-stressing force on the beam. This effect can be used, for example, to pre-stress a complete bridge span. In order to generate the necessary force the SMA rods must simply be heated by passing an electric current through them. This obviates the need for using elaborate tensioning systems and jacket tubes, as used in conventional pre-stressing techniques.