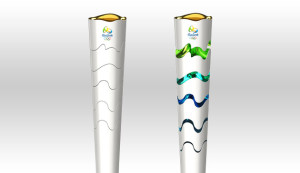 The Rio 2016 Olympic torch is crafted from recycled aluminium and resin with a stain finish and has different segments which expand when the Olympic flame is passed from one torch bearer to another. These segments represent the soil, sea, mountains, sky and sun and are coloured according to the Brazilian flag – green, yellow, blue and white.

The Brazilian President Dilma Rousseff has been unveiled the torch by theat a special ceremony which took place in the capital of Brasilia.

Organisers said lightweight materials were used to improve the experience of the torchbearers, as well as a design that induces a grip closer to the torch’s centre of gravity.

Beth Lula, the organising committee brand director, said: “The design of the Rio 2016 torch was inspired by the Olympic spirit, our country’s nature, and the harmonious diversity and energy of our people.”

Following the traditional Olympic flame lighting ceremony in Olympia, Greece, the Olympic flame arrives in Brasilia in May 2016 and will be carried by 12,000 torch bearers across 300 cities and towns reaching an estimated 90% of Brazil’s population.