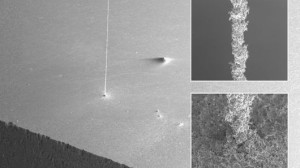 Researchers from the University of Twente in (Netherlands) have come up with a method to 3D print in metal using tiny drops of copper and gold with the help of a laser. The ability to print more structures that better conduct heat and electricity could lead to entirely new devices and components being created.

The method developed at the University of Twente in the Netherlands involves microscopic drops created from a thin metal film that is melted by a pulsed laser. This precision melting allows microscopic metal drops to be placed onto a substrate and stacked to create high resolution metal structures. The team claims it was able to stack thousands of metal drops into a tiny pillar just 2 millimeters tall and 5 microns in diameter. The researchers say just about any shape can be created using the technique, including electrodes and copper circuits.

The process is distinct from micro laser sintering or direct metal laser sintering, both of which use a laser in combination with metal powders to create new structures.

The key to this breakthrough in printing metals seems to be using a higher energy laser than in previous attempts. This allows for the creation of so-called “fast droplets” that quickly deform into flattened disks when they impact the substrate. Earlier experiments used lower energy lasers, creating drops of metal that maintained a more spherical shape and led to the creation of a stack that was less stable.

The method still requires some refinement as the high-energy laser currently causes droplets to also land next to the desired placement location. The team plans to look into this effect to improve printing capability not just in metals, but also using gels, pastas and thick fluids.

Other efforts around the globe to print metals are also beginning to bear fruit, including hopes to exploit Australia’s plentiful titanium reserves.