The innovations brought by 3D printing can effectively support the traditional foundry process. here is how it is possible to implement, through the FDM technology, disposable patterns for the casting of mechanical/hydraulic components in small batches, with strict tolerances and complex geometries. 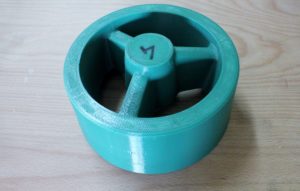 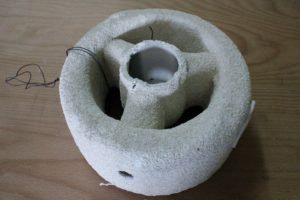 Its name is Apixè3D and it is a start-up established in 2016 in Marche with a precise target: to bring innovation in the territory where it operates and beyond its borders. Innovation that in its case results in the technology that must be certainly counted among the most interesting elements of what is nowadays commonly called Factory 4.0: 3D printing. The possibility of manufacturing objects in additive manner, by adding material layer by layer with technologies that range from FDM to metal sintering – instead of removing it as it happens with traditional processes, like the machining on NC machines such as lathes and milling machines – does not need in-depth explanations any longer, since today it is diffused all over the world. However, also in the additive manufacturing ambit there is large room for further innovation in the front of materials, of processes and of particular applications. This is the mission of Apixè3D, committed to supporting manufacturing companies, as 3D printing service, in improving and making their productive process more efficient. It succeeds in it studying new materials, developing shapes and sizes that can optimize the used proceedings. In the Marche company, the daily activity provides for the implementation of functional prototypes, for dimensional and aesthetical controls, pre-series and parts with metal inserts through 3D printers that use plastic materials, wooden composites, aluminium, rubber and carbon fibre (but also metal parts exploiting the laser powder sintering). The company, using apposite software and sophisticated reverse engineering techniques, can also process prototypes starting from existing pieces for which the original design files are not available. Among its application ambits, it is worth mentioning the implementation of 3D prototypes for the medical sector starting from TAC or RMI scanning, the use of the stereolithography to make suitable resin patterns for the implementation of tools for small metal parts or jewellery, as well as reconstruction of the territory and of buildings by means of aerophotogrammetry with drones and successive 3D printing.

The synergy between 3D printing and foundry

One of the ambits where Apixè3D is introducing more innovation is represented by its researches in the ambit of the synergy between 3D printing and the foundry world, between innovation and tradition. In this sector, the additive manufacturing allows avoiding the implementation of a conventional tool, replaced by a disposable pattern made of plastic material (PLA) and wax, carried out with a 3D printer. The benefits attained with this procedure are numerous and include lower development costs, fast identification and reduction of design errors, decrease of the post-machining cost and naturally a higher speed in the pattern implementation. Last but not least, on the contrary very important: the possibility of producing single objects without involving the cost of a traditional tool. Moreover, the patterns printed in 3D are biodegradable and they do not release toxic residues in the environment. Not fortuitously, precisely about this subject, Apixè3D aroused lively interest when it presented the project entitled “Innovation as support to tradition – How an innovative technology like 3D printing can support the traditional foundry process” to the audience of the Award innovation 4.0. «Actually, we aroused – states Cinzia Toma, business manager of Apixè3D – lively success and a lot of curiosity by the attending public, to the extent of boosting us to make further tests especially on materials: we have in fact started with special steel castings. Now we can apply our technology to other materials, like cast iron and aluminium. In all casting processes, we need a pattern/tool generally made of wood, resin, aluminium and so on, whose cost notably affects the total. Moreover, often the pattern used is not definitive but it needs modifications or, even, it must be remade from scratch, with a consequent exponential rise in costs. We propose an alternative solution: when geometries are complex, producing a disposable polystyrene or wax pattern is difficult. When we deal with prototypes or small series that do not justify the implementation of metal or wooden tools, the 3D printing is helpful. The achieved patterns are faster, more stable, more precise, cheaper and especially modifiable without any problem».

The choice of the material

Let us see now more in detail the concrete application case presented in the speech drawn up together by Cinzia Toma and by Veronica Bregagna, 3D designers of Apixè3D, focused on the implementation of disposable patterns in 3D printing, for the casting of mechanical/hydraulic components in small batches, with strict tolerances and complex geometries. In particular, Apixè3D implemented the disposable pattern and the foundry parts of an impeller for hydraulic pumps of CF8M (AISI 316) steel, where it is fundamental the precision in terms of roughness (RA 3.2) of the inner blades, parameter that determines the efficiency of the impeller. The first process phase concerned the study of the material to produce the disposable pattern. With the aid of some foundries, Apixè3D carried out various tests to evaluate the most suitable material, expected to be a substitute of polystyrenes (concerning the replicast process) or of lost wax (in micro-castings). Since it had to create the ceramic shell around the disposable pattern, the fundamental feature required to the material was not undergoing expansions, to avoid the risk of breaking and then compromising the entire work. Another important aspect was the post-heating residue: once baked the shell, the material of the model was expected not to release residues of any kind in the interior. The candidates that proved to be suitable were the PLA (polylactic acid) and the PETG (a polystyrene), but they chose the first because it is fully biodegradable at temperatures exceeding 60°, it has a lower cost and it is more easily workable at lower extrusion temperatures.

The pattern printing, the risers and gates

Starting from the impeller design supplied by the customer, Apixè3D printed the disposable pattern through FDM (Fused Deposition Modelling) technology, using a big-size (900 x 700 x 500 millimetres) customized printer. The Marche company provided some interesting printing details and parameters. The necessary machine time for the object production was 48 hours, using PLA filaments. Finally, in agreement with the foundry that carried out the work, they implemented also the gates and the risers, still made of PLA and through FDM, starting from the designs realized by their technical office in collaboration with the one of Apixè3D. The manufactured parts were assembled and sent to the foundry for the casting process. 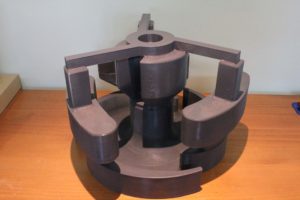 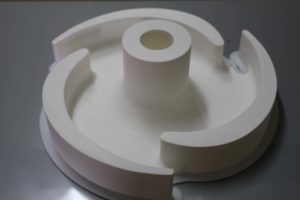 «The advantages of this process – explains Cinzia Toma – are numerous. From the technical point of view, the complex geometrical shape sometimes hinders the production of some components. The tool implementation might be almost unfeasible with traditional stock removal machines. Moreover, exploiting processes like the replicast or the microcasting, we can avoid post-casting machining. From the strictly economic point of view, the disposable pattern made with 3D printing replaces the conventional tool with a noteworthy price decrease (in the order of 1/10). Besides, also the post-mechanical machining cost decreases. The use of 3D printing involves the primary advantage of the fast execution (rapid prototyping). Finally, there are the environmental benefits: the material used for the 3D pattern is PLA, fully biodegradable already in water at 60°, unlike polystyrenes that, burning, emit toxic residues. The pattern precision, combined with the already described foundry processes, partly eliminates the post-machining on the metal, thus attaining reductions of metal powders and scraps and of sound emissions».

Undoubtedly, it is an interesting application, well conceived and actually able to bring innovation into traditional foundry processes, as 3D printing has brought new lymph and new possibilities in the medical, jewellery and manufacturing sectors in general. The adoption percentage of the new technologies worldwide is growing and also in our Country the interest in the additive manufacturing is rising, especially in the fields with a stronger bent for accepting evolutions. And in the foundry ambit: «In the traditional manufacturing industry – ends Cinzia Toma – there is still a bit of mistrust and scepticism. Nevertheless, we think that, once understood the process and ascertained the advantages that foundries can have from a piece prototyped in 3D printing, there will be a strong demand for this type of technology».