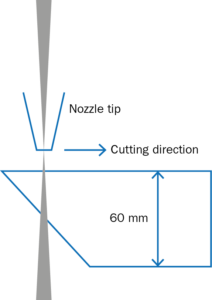 Currently, the laser cutting used for nuclear dismantling applications has aroused a certain interest. The advantages of using laser technology for this application include the high available speeds, the process tolerance, the lightness of the cutting head, the lack of a reaction force with the part to be cut, and the easy automation of the laser cutting process. Naturally, the laser cutting is a thermal process with a potential damage since the laser beam, crossing the cut kerf, might damage or even fire something positioned behind the part to be cut. This document describes the use of an optical diffractive element in the laser beam optics. To the ends of the laser welding process, it is possible to apply diffractive optical elements (DOE- Diffractive Optical Element). These optics are used in processes like the edge welding, the almost simultaneous welding or the simultaneous welding. Starting from a punctiform laser emission, they generate a distribution of the power density according to the applications. DOE is an optical component that allows adjusting a contour with a punctiform laser emission. Along this contour, by means of diffractive optical elements, it is possible to adapt the power density distribution to the requisites. This typology of elements is used for complex welding profiles in the simultaneous welding ambit but also in the edge welding and in the almost simultaneous welding, for the optimization of the power density distribution. DOE suit the kind of activity to be performed and therefore they must be calculated and simulated in advance, since they are designed for a single wavelength. During the application, also the laser wavelength used must be known.