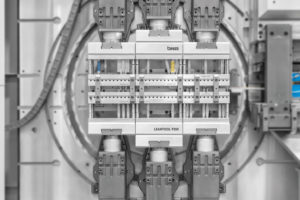 Manufacturers of stamped and formed parts know that time is money. If you are the first to present a comprehensive, competitive offer to the customer, you are awarded the contract. With its servo-controlled RM-NC and GRM-NC stamping and forming machines in conjunction with the LEANTOOL system, Bihler offers a standardized solution platform to be one step ahead of the competition. With the LEANTOOL progressive equipment, Bihler now complements the LEANTOOL System for the production of even more complex stamped and formed parts. The linear LEANTOOL combines the strengths of progressive tool technology with Bihler machine technology: less complexity in the tool, a very high level of standardization and maximum flexibility and productivity. The modular system for linear bending tools offers the same advantages as the radial version: shortest implementation times, significantly lower tool costs and fastest time-to-market for your progressive components. More than 70 percent of the lean tools are standard parts and blanks. The modular design reduces setup times to under 30 minutes for some applications. Individually controllable movements can be implemented from above, from below and from the side. This ensures an uncluttered layout of the LEANTOOL progressive equipment and guarantees flexible and safe production on the GRM-NC.