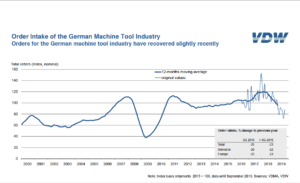 “International demand for machine tools is continuing to decline, although the levels have recovered slightly just recently,” said Dr. Wilfried Schäfer, Executive Director of the VDW (German Machine Tool Builders’ Association), Frankfurt am Main, commenting on the results. Never before has the industry been confronted with such an accumulation of factors, all of which have had a negative impact on business: a cyclical downturn coupled with trade conflicts and instability in the largest customer, the automotive industry.

Compared with the summer months, however, the volume has recently stabilised somewhat for metal-cutting machines, which account for around 70 per cent of total production. “We are seeing the first EMO effects here,” says Schäfer. However, it remains to be seen whether this will stabilise in the coming months. Orders levels in forming machinery even rose again in September. Foreign projects in particular had a supporting effect here.

Overall, order levels from the Eurozone are a source of worry. These fell by well over 30 per cent in each of the three months of the third quarter. Oxford Economics, VDW’s forecasting partner, does not expect any appreciable recovery in demand from Europe for the year as a whole, either. Asian business is also giving the experts cause to worry. The boost provided by US financial policy is now dwindling, meaning that America is also set to become more challenging as a market. All in all, the international economic climate has deteriorated considerably and is holding back investment, even if the mood has brightened a little recently, said Schäfer.

Against this backdrop, VDW has lowered its production forecast for 2019. “In view of the sharp drop in orders in the current year, it will no longer be possible to maintain the predicted moderate decline in production,” continued the VDW Executive Director. The association is now assuming a decline of 4 per cent, with even this figure being supported by the clearing of the order backlog. The gradual stabilisation in demand which was expected in the summer for the second half of the year has failed to materialise. Capacity utilisation fell to 86.9 per cent in October, down from 87.9 per cent three months earlier.

“The real problem will come in 2020 when the backlog of orders has been cleared,” said Schäfer. In the current year, there is no longer any real chance of building up a significant buffer. The anticipated recovery in demand in 2020 is also only likely to be moderate after the sharp fall. This is also reflected in the forecasts for international machine tool consumption. Following the decrease of more than 4 per cent in the current year, the moderate baseline scenario described here represents a best case scenario. The calculation of national currency rates of change is also having a stabilising effect.