In the third quarter of 2013, order bookings for Germany’s machine tool industry rose by 9 per cent compared to the third quarter of 2012. Domestic orders were up by 12 per cent, while orders from abroad were up by 6 per cent on the preceding year’s figure. For the first nine months of 2013, there was an overall drop of 6 per cent: domestic orders fell by a tenth, and orders from abroad by 4 per cent. “Demand for machine tools has achieved the long-awaited turnaround”, comments Dr. Wilfried Schäfer, Executive Director of the sectoral organisation VDW (German Machine Tool Builders’ Association) in Frankfurt am Main. This applies to both domestic and export orders, and to the two technology segments involved, metal-cutting and forming machine tools. “The new Chinese government is rigorously reviewing the entire investment programme of the ongoing five-year plan”, explains Wilfried Schäfer. Before this process has been completed, he added, a substantial recovery in demand cannot be anticipated. Contrary to expectations, however, Western Europe has been doing better than anticipated. Order bookings in Central and South America have also shown double-figure growth. In Asia, the figures are up in South Korea and the South-East Asian countries. 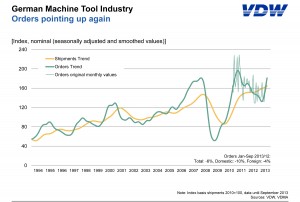