Automated assembly operations are a key to success. They enable stable manufacturing, high precision manufacturing and greater responsiveness to market demands. The Fraunhofer Institute for Factory Operation and Automation IFF’s innovative digital instrumentation and information networks are increasing the transparency of aircraft manufacturer Airbus’s manufacturing operations and optimizing collaboration between humans and machines. Was the cabin door delivered on schedule? Does it have the same temperature as the fuselage? And did its installation go as planned? The installation of a cabin door is just one of many assembly operations in the manufacture of an airplane. It is so multi-staged and demanding, however, that Airbus focused on it in its Integrated Verification, Sensors and Positioning in Aircraft Manufacturing research project or iVeSPA for short. “We want to find out how we can automate and control our assembly more streamlined,” says Eugen Gorr, in charge of the development of innovative assembly operations at Airbus in Hamburg. “The operations surrounding the installation of a cabin door are particularly well suited for ascertaining which data we collect how and where, how we process them, and how we can feed them back into the assembly process in real time. The cabin door is nevertheless just one example. Other components can be tracked in exactly the same way.” The Fraunhofer IFF’s new sensor and data processing concepts are intended to enable optimized process monitoring and its incremental integration in the assembly environment. The aircraft manufacturer contracted the Magdeburg institute to develop these concepts. Cabin door installation was selected as a model use scenario. It is an ideally suited operation along with longitudinal fuselage alignment, horizontal stabilizer alignment and air mixer assembly.

Sensors for the material delivery units

The solution for the cabin door centered on the material delivery unit (MDU) that trans-ports a door from the supplier to the fuselage. It was equipped with diverse sensors and data storage systems that supply Airbus logisticians with relevant information anytime and anywhere during the entire operation. For which airplane is the door intended? Is it a left or a right door? Did anything unusual happen during its transport that requires reinspection before installation? Has the door warmed up to the
temperature of the fuselage? Is it still on the MDU? Or has it been installed? If yes, were there deviations from the plan during installation? Could the digital record of these deviations be used to improve and streamline the assembly process? Does Airbus have to notify the supplier of this? “Until now, communication in assembly plants has been based more on paper documents and word of mouth and less on digital aids,” says Martin Woitag, research scientist in the Fraunhofer IFF’s Measurement and Testing Technology Business Unit. “And since feedback on the current stage of manufacture is given only once a week, it is significantly decoupled from the time of its completion.” 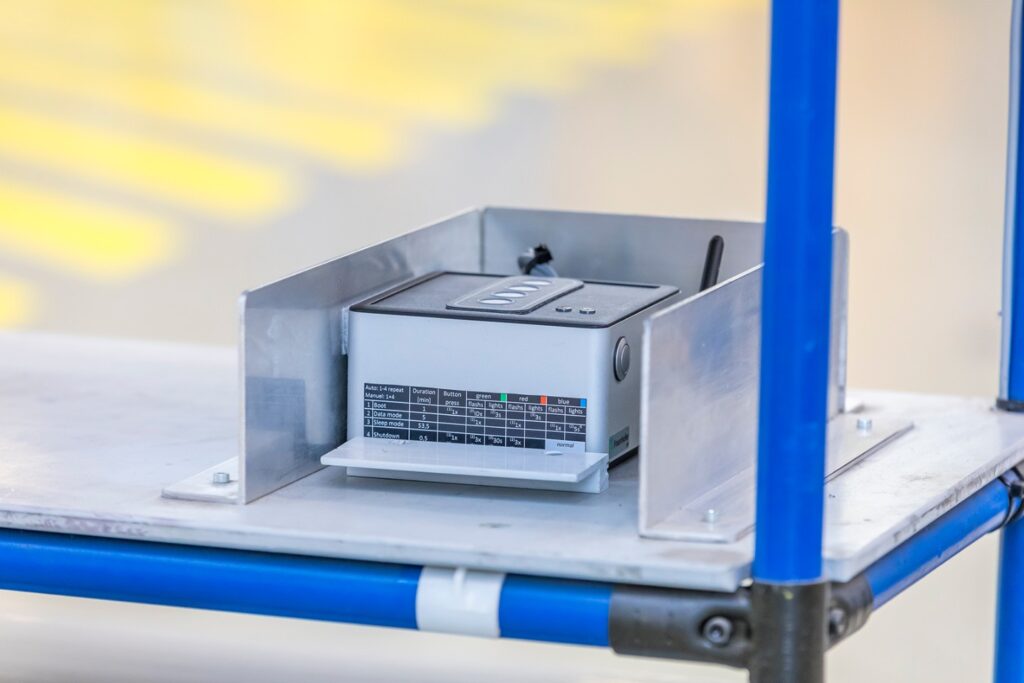 Woitag and his team developed the AirBOX mobile sensor box to infer relevant information from the collected data without delay.” It permits interconnecting sensors in a flexible network and infers events from the data, which are required for process monitoring and ensure prompt actions. The amount of data transmitted remains so small that the wireless network in the assembly plant is not utilized more than necessary. The AirBOX can be configured so that additional modifications in the existing infrastructure are unnecessary. It is highly compatible with other systems and cheaper than comparable solutions too. Although it tracks the cabin door’s location and
temperature continuously, it does not send a signal to the server until the sensor data include two criteria, the correct installation location and attainment of room temperature. Only then is the cabin door ready for installation because it has not only been delivered but also warmed up to the temperature of the fuselage. In principle, one single bit of data suffices to notify Airbus of this event. “The AirBOX continuously tracks a multitude of manufacturing data from different sources. Logical connectives and rules produce the information needed on the cabin door,” the engineer points out. The AirBOX in its portable aluminum housing with LED status displays and general purpose input buttons can be configured locally by a cabled PC or over the network. It employs the standard IoT protocol MQTT and encryption technologies. The sensor data and events are stored in a local database and visualized on the web. Up to six automatically recognized and preconfigured sensors can be connected to the box to build a sensor network. “The AirBOX opens an abundance of digitalization options that support manufacturing operations,” says Woitag. Airbus and the Fraunhofer IFF are therefore already testing other use cases. The AirBOX concept could play a role in the development of a visual assistance system for wing and fuselage assembly, for instance.