Orders received by the German machine tool industry in the third quarter of 2020 were 29 per cent down on the same period last year. Orders from within Germany fell by 26 per cent. 30 per cent fewer orders were received from abroad. In the period from January to September, orders fell by 33 per cent. Domestic orders were 27 per cent down on the previous year. There was a 36 per cent reduction in the level of orders from abroad.

“The machine tool industry is now fully in the grip of the second corona wave,” said Dr. Wilfried Schäfer, Executive Director of the VDW (German Machine Tool Builders’ Association) in Frankfurt am Main, commenting on the result. “The economic indicators rose in the third quarter, but any hopes of a short-term improvement are now fading fast. Orders received in the third quarter remain at the low level of the previous months,” Schäfer continued.

Partial lockdowns have been imposed in Germany and in many other European countries. For machine tool customers, this is a highly uncertain and challenging environment in which to plan investments and make decisions. However, the picture differs from region to region and sector to sector. Asia, and China in particular, is recovering faster. The situation in Europe, by contrast, remains much more tense.

The electronics industry is one of the few client sectors to post gains, and thus to offer sales opportunities, in the current crisis. The same applies to medical technology, ventilation equipment and consumer-related areas such as the food and packaging industry.

The automotive industry, on the other hand, has also been badly hit by the crisis. It is profiting from the strong rise in demand in China, yet the structural change towards new types of drives is being felt more and more, and investment budgets are increasingly being reapportioned. “This shift offers opportunities, but comes at a considerable cost in terms of machining volumes,” explained Schäfer.

Against this background, the VDW has had to revise its production forecast for the current year. “We are expecting a decline of about 30 per cent”, said Schäfer. In terms of production volume, this represents a loss of EUR 5 billion. At just under EUR 12 billion, however, this volume is still 2 billion above that posted during the 2009/2010 financial crisis. “Only in the medium term will the industry return to its 2019 level,” concluded Schäfer. 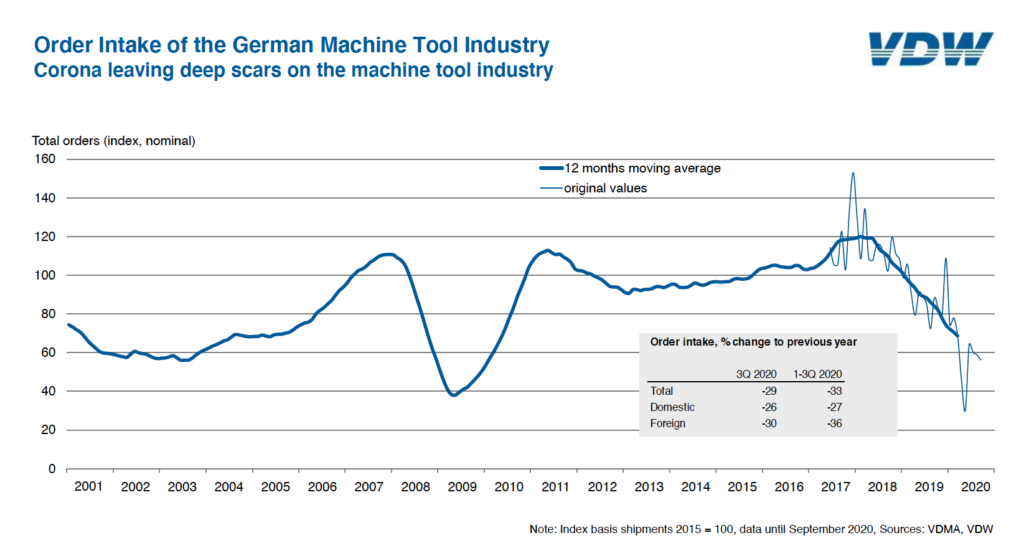 The German machine tool industry ranks among the five largest specialist groupings in the mechanical engineering sector. It provides production technology for metalworking applications in all branches of industry, and makes a crucial contribution towards innovation and enhanced productivity in the industrial sector as a whole. Due to its absolutely key role for industrial production, its development is an important indicator for the economic dynamism of the industrial sector as such. In 2019, with an average of 73,400 employees (firms with more than 50 staff), the sector produced machines and services worth around 17 billion euros.