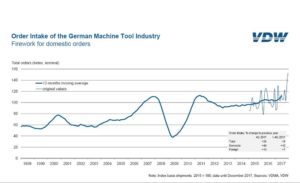 In the fourth quarter of 2017, the German machine tool industry’s order bookings increased by 24 per cent in comparison to the preceding year’s equivalent period. Domestic orders were up by 48 per cent. Orders from abroad rose by 13 per cent. For 2017, there is an overall plus of eight per cent: domestic orders climbed by ten per cent, while orders from abroad ended with a seven-per-cent plus. The Eurozone nations constituted the driving forces here.

“The year’s second half saw a breakthrough on the domestic market,” comments Dr. Wilfried Schäfer, Executive Director of the sectoral organisation VDW (German Machine Tool Builders’ Association) in Frankfurt am Main. “While domestic orders were still falling by double-figure rates in the year’s first half, the German industrial sector in the year’s second half threw off its caution and opted for massive investment,” he adds. In particular, following the EMO Hannover 2017 in September, orders veritably soared: plus 41 per cent in October, plus 67 per cent in November and plus 37 per cent in December.

The flood of orders is attributable not least to the good performance of the global economy. All around the planet, the economies are running superbly on broadly based foundations. Capital investment at the most important customer sectors and machine tool consumption are rising in all regions. “So the customer sectors are confident of lucrative business, and are upsizing their capacities,” explains Dr. Schäfer. “This is benefiting all technologies in the machine tool industry,” he adds. Most recently, forming technology, too, has been booking large-scale orders again, which had been absent in the preceding months.

Overall, the investment boom has once more boosted the machine tool industry’s results. Production output in 2017 reached another new record level, with a plus of four per cent and 15.7 billion euros.